Intel might be losing some ground to rival AMD, as the latest Steam hardware survey shows (again), but you can still build a high-end gaming PC (or any type of PC) around the chip maker's silicon. And if that is what you intend to do, check out this deal on a 10th Gen Core i7-10700K processor bundled with some themed swag.
You can grab the whole kit-and-caboodle for $319.99 at Newegg (Save $90 - 22% Off). It comes with the Core i7-10700K, a CLG-themed jersey, and a dual-themed (CLG and Intel) mouse pad. You are not paying any extra for the added goodies, either. In fact, the cost of the bundle is actually cheaper than buying the CPU by itself. 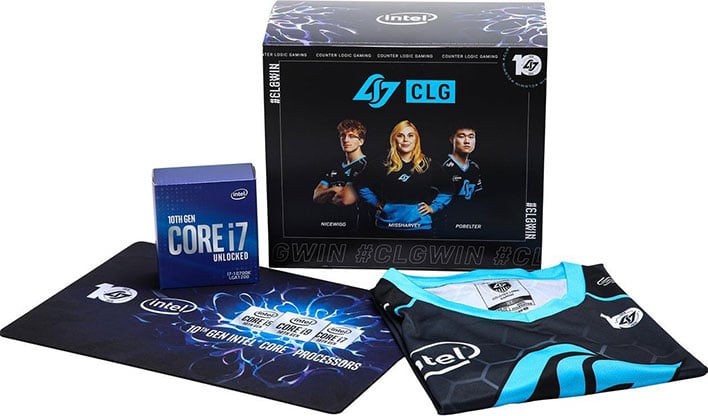 One top of it all, it also includes an Intel software bonus (Fortnite Splash Damage pack and access to 10+ apps) valued at $150, to sweeten the pot. Not that it even needs sweetening. To put the price into perspective, it matches what Micro Center is asking for the CPU alone, if purchasing in-store. Micro Center typically has the lowest prices on CPUs, but the caveat is you have to live near one of its retail locations.
The Core i7-10700K is based on Intel's Comet Lake architecture. It is an 8-core/16-thread processor with a 3.8GHz base clock and up to a 5.1GHz turbo clock, and has 16MB of L3 cache. It is a capable chip for a variety of tasks—gaming, content creation, productivity.
That said, AMD's fancy new Ryzen 7 5800X is the overall better performing processor, so that is something to consider. However, it also costs around $130 more than this deal, and is difficult to find in stock. Still, there is no shame in waiting for inventory levels to normalize, if that is the route you want to take.
Likewise, there is no shame in pouncing on this deal, as this is a fantastic price. Even if you don't care about the esports-themed swag, this is still as cheap as it gets for a Core i7-10700K.