AMD versus Intel is sort of a David versus Goliath story, only these days, AMD has armed itself with more than just a slingshot. Zen is the real deal. That is abundantly clear by now, but lest anyone needs reminding, a peek at Steam's latest hardware survey results for November 2020 show how well AMD's processors are being received by gamers, as it continues to, uh, chip away at Intel's share.
I can hear the groans at the pun, but bear with me. The point is, this is a different AMD versus Intel battle than in past years, before Zen came along. AMD for a long time was the also-ran, while Intel dominated the market with better performing CPUs at the high end. But now? The Ryzen 5000 series is an awesome lineup, while the previous generation Ryzen 3000 series still holds its own.
Combined with excellent platform support—X570 and B550 are compelling chipsets, both with support for PCI Express 4.0—more than a quarter of Steam users are now rocking an AMD processor, give or take. Have a look... 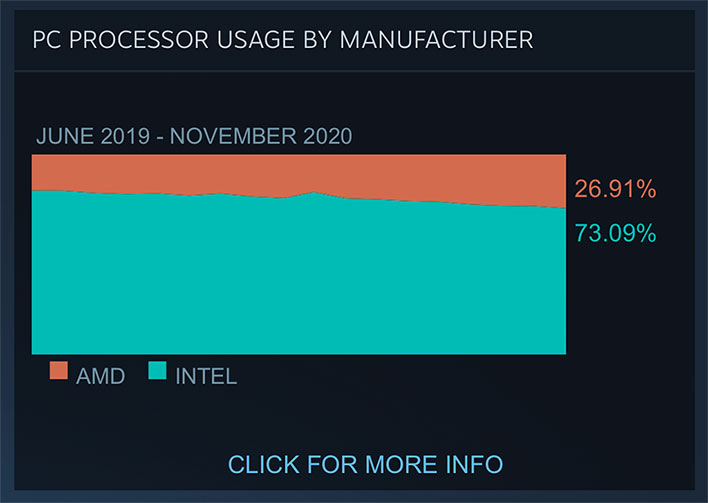 I say "give or take" because Steam's hardware survey is not scientifically perfect, for a few different reasons. But it does at least give us a rough idea of where things stand. Additionally, we can track the data over time to see where things are trending, and looking at the CPU breakdown, AMD hardware is trending upward at the expense of Intel.
In November of last year, AMD's CPU share on Steam stood at 20.5 percent. And two years ago, it was at 17.53 percent. So from November 2018 to November 2019, AMD carved away nearly 3 percent of Intel's share on Steam, and from November 2019 to November 2020, it took away an additional 6.41 percent. A greater than 9 percent gain over the course of two years is impressive.
The actual percentage of all Steam users is probably different than these snapshots, but likely not drastically so. After all, it is not just Steam's own data that shows AMD on being on the rise. The best selling CPU on Amazon is the Ryzen 7 3700X, and seven of the best selling CPUs are Ryzen parts. If the Ryzen 5000 series was better stocked, AMD might hold all 10 spots.
As it stands, Intel does hold a few higher ranked spots, though. A couple of notable ones are No. 2, the Core i7-9700K for $259.99, and No. 3, the Core i5-9600K for $196.99, both on sale.

Intel will have a chance to take some share back, or at least slow the decline, when Rocket Lake arrives next year. That will be another 14nm part, though, so we will have to wait and see what kind of performance gains it brings over Comet Lake. Also, AMD is not standing pat—it is on track to launch Zen 4 next year.