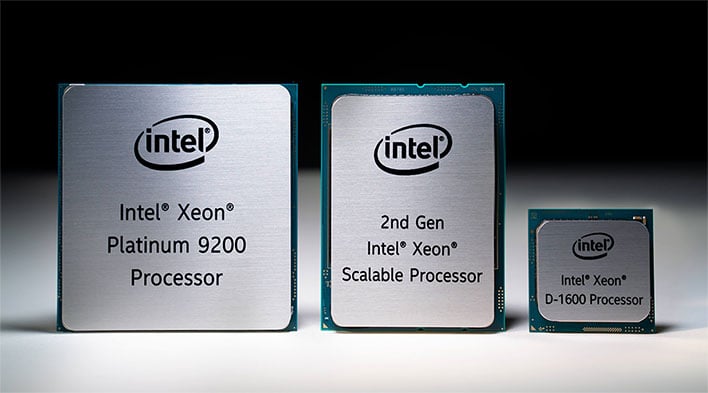 Intel closed out 2019 with $72 billion in revenue, an all-time high for the company, and one heck of a feather for CEO Bob Swan to put in his cap (it was his first full-year at the helm). So, it's not as though Intel has entered into a tailspin. However, Intel does face stiffer competition from AMD these days than ever before, and that is having an effect on its business strategy. We've already seen price cuts from Intel, and if the latest rumor is true, it will soon refresh its second generation Xeon Scapable server processor line
As the story goes, the move is intended to bring more cores and higher clockspeeds into the mainstream and value segments. AMD has been putting the pressure on Intel with its EPYC "Rome" processors, which typically offer more cores and threads for the money.
"AMD is forcing them to compete on core count," CRN quotes an unnamed source as saying. "The only way to improve performance without dramatically increasing power consumption is higher core counts. It will enable Intel to do a better job of spec matching against AMD's [processors]."
According to CRN and its multiple sources, Intel is readying 18 new Cascade Lake Refresh processors. Pricing is not clear at the moment, but the expectation is they will debut at similar price points to their corresponding Cascade Lake SKUs, giving customers more value for their money. It could also help Intel retain customers who might be thinking about jumping ship to AMD.
Here's a look at the supposed lineup...
Some of the processors have already appeared on OEM websites and channel vendors, including Dell, Lenovo, and Connection (which has the Xeon Gold 6258R listed at $4,290.01). Even Intel has referenced at least two the above models in microcode updates, so there is little doubt an official launch is imminent.
None of these SKUs provide an answer to AMD's EPYC processors with higher core counts, nor are they intended to. Intel will attack higher-end EPYC chips with its Cooper Lake lineup later in the year, followed by server processors based on its 10nm Ice Lake architecture.
In the meantime, the Cascade Lake Refresh stack introduces a 28-core model to the Gold series, whereas previously the Gold models topped out at 24 cores. There is also an 8-core Bronze model (up from 6 cores).
Actual pricing will ultimately determine how interesting these new models are, and if the rumor is true, all will be revealed on February 23.