When it comes to its highly profitable Xeon Scalable server processors, Intel has been on the defensive as of late versus its chief rival AMD. While INTC has an overwhelmingly large lead in server processor market share, it also is looking to protect that lead with the release of its Cascade Lake Refresh processors. This is not a complete retooling of Intel's second-generation server processors, but rather some skillful optimization of features, speeds, feeds and pricing to make them more compelling for data center and enterprise customers.

While Intel makes no comparisons to AMD’s EPYC 7002 processors in this release, the company does say that this new Cascade Lake Refresh offers up to a 36 percent performance uplift and 42 percent higher performance-per-dollar compared to first-generation Xeon Scalable processors. 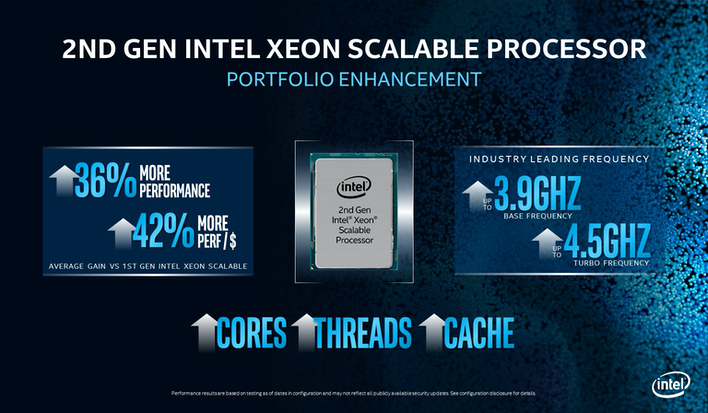 This performance uplift has been achieved with the primary optimizations of more cores, increased cache, or higher clock frequencies (or a combination of those three). These processors are aimed at the value to mainstream segment for server processors, with the Xeon Gold 6238R and Xeon Gold 6258R both offering 28-cores and 56 threads, matching the configuration of the Xeon Platinum 8180.

Intel is particularly calling attention to the 8-core/16-thread Xeon Gold 6250, which has base/turbo clocks of 3.9GHz and 4.5GHz respectively – the highest in the family. Most of the processors have either an “R”, “T” or “U” designations to differentiate them from existing SKUs in the second-generation Cascade Lake family. 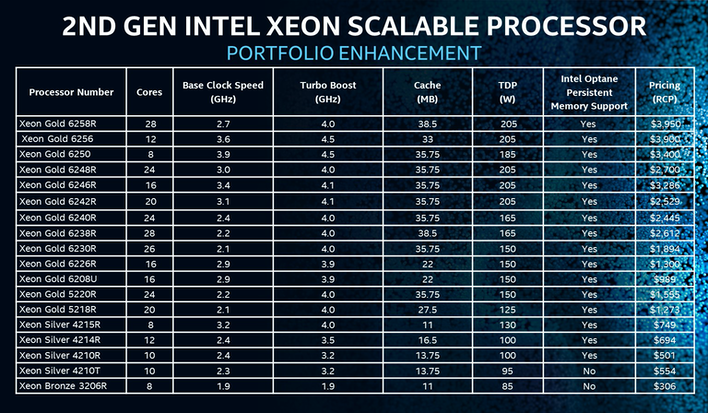 “Intel’s data centric platforms offer the broadest market coverage of any server processor platform – from cloud, through the network, to the intelligent edge,” said Lisa Spelman, corporate VP and GM for Intel’s Xeon and Memory Group. “Working closely with our customers, we are delivering these new server processors to address their performance and pricing needs across a broad range of markets and workloads.”

Intel is offering more bang for the buck compared to its initial round of second-generation Xeon Scalable processors that launched in 2019, and that should help it fend off AMD's increasingly more competitive offering that can deliver up to 64-core/128-thread per socket solutions. Regardless, with the Cascade Lake Refresh now in production, we could see Intel's supply issues taper off a bit and there's no question pricing here is significantly more competitive. It remains to be seen if Intel's Cascade Lake Refresh will put a damper on AMD expectation to achieve 10 percent server CPU market share by Q2 2020 but it should be fun to watch the battle in the data center trenches.