Intel has announced a launch date for its mobile family of Arc A-series GPUs, and answered three of the top questions concerning its upcoming Arc GPUs. In an online event at the end of the month, the tech company will showcase Intel technologies such as Intel Deep Link, XeSS and more.


Intel announced earlier this year that its mobile Arc GPUs would be launched in Q1, and it seems it will be using almost every day of the quarter to do so. The tech company announced yesterday that it will be hosting a launch event called A New Stage of the Game on March 30th, and will be giving a first look at its new discrete graphics for laptops.

"We are excited to begin launching our mobile family of Intel Arc A-series GPUs on March 30th and showcasing key technologies," Lisa Pearce, vice president and general manager for the Visual Compute Group for Intel, said in a blog post.
Pearce also indicated that Intel wants to engage directly with the tech community, gamers and creators in regard to its Intel Arc GPUs. She indicated that the company wants to keep its community updated on upcoming hardware and software releases through regular postings. To kick off that initiative, Pearce tackled what she considered to be the top three questions Intel has been asked since its CES press conference in January.


The first question involves why Intel chose to release the mobile version of Intel Arc graphics ahead of its desktop variant. Pearce pointed to the fact that Intel already powers a significant share of the world's notebooks. Intel seeks to take advantage of its decades of experience when it comes to the mobile platform. By beginning with its mobile products, it aims to bring all its technologies (CPU, graphics, media, display, I/O, etc.) in concert with one another and deliver a great experience for its users. 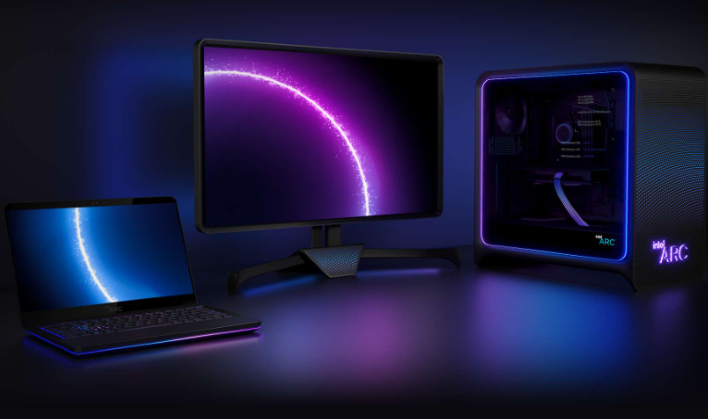 Pearce said the next question most asked was in terms of what type of performance could be expected from the first product to make it to market, the Intel Arc A370M. She stated that the first Intel Arc discrete graphics products to make it to the mobile market will produce up to a 2X improvement in graphics performance vs. integrated graphics alone while still maintaining its small form factor. While this performance may seem a bit underwhelming, Pearce shared that higher performance configs of Intel Arc graphics for both notebook and desktop designs will follow and will raise the performance level for gamers and creators.

Project Endgame was the topic of a lot of questions as well, as people wanted to know what it was all about. Intel recognizes that PC gaming can be difficult when it comes to compatibility issues, long download times, high performance variability and frequent patches and updates. Project Endgame is a unified services layer that aims to leverage the cloud, edge, and your home to improve your gaming, and non-gaming, PC experiences. With Project Endgame, Intel looks to untether its users from their local hardware specs, with the goal of petaflops of compute that will be available in a few millisecond latency. This technology will take its first public steps in Q2 of this year.

Intel has been saying that it wants to get its new discrete GPUs in the hands of tech enthusiasts, gamers and content creators. It also wants to engage with this community on features or improvements they would like to see next. One of the best ways to take part and have your voice heard is by joining the Insider Community Discord. In the coming months, Eric Mantion, aka CaptGeek, said there will be dedicated channels added to the Discord community for sharing your thoughts and ideas when it comes to Intel Arc and other technologies. In the meantime, you can jump into all the other channels available now, and begin to become part of the community.

If you would like to read more of what Lisa Pearce had to share, you can visit the Intel website. Also, if you are a gamer, content creator, or simply someone who loves technology and PCs, be sure to take advantage of the opportunity Intel is giving the community. By sharing your ideas, you can help shape the future of Intel technology.