You may have heard, Intel is releasing desktop graphics cards soon. Assuming you haven't just returned from living off the grid for a spell, you already know this. But when exactly are these cards finally going to manifest, and how much will they cost? If the latest rumors pan out, Intel's first Arc Alchemist graphics cards could land on the desktop by the end of May starting at $150.
There's been plenty of speculation about pricing, and even some clues from Intel arising out of its Arc Scavenger Hunt that recently concluded. As we wrote about a couple of days ago, the grand prize is a "Premium" Arc graphics card, some branded merchandise, and six months of Xbox Game Pass for PC valued at $900.
Subtracting the cost of Xbox Game Pass for PC and assuming the swag is valued at around $100, the Premium GPU is probably in the neighborhood of $749 to $799. Using the same formula, winners of a "Performance" Arc graphics card with the same goodies piled on top are probably getting a GPU that costs around $599.
Maybe those estimates are right on the money, maybe not. Either way, there will undoubtedly be less expensive SKUs in Intel's lineup. To that end, the folks at WCCFTech claim to heard from their "friends in Taiwan" that Intel revealed pricing for some of its lower end GPUs during a recent call with its supply chain partners. 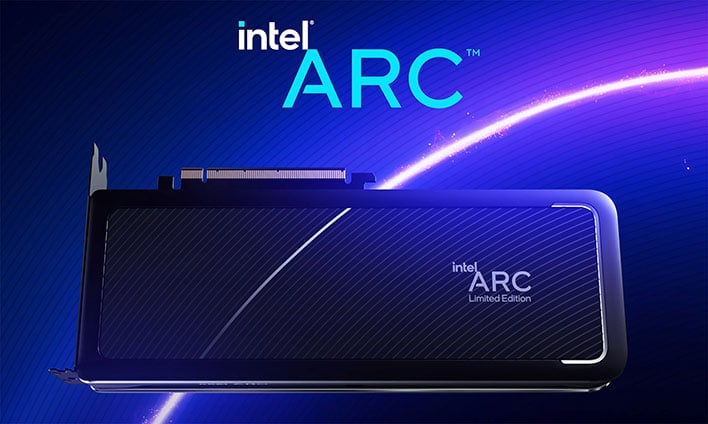 Those sources claim Intel will stagger its desktop GPU launch, which is the same thing AMD and NVIDIA normally do. In this case, the initial launch is said to focus on three models, the Arc A750, Arc A580, and Arc A380.
The Arc A380 is purportedly an entry-level discrete graphics card comparable in performance to NVIDIA's GeForce RTX 1650. If the sources are correct, it will launch around the end of May or in early June with a $150 MSRP.
Likewise, the Arc A750 is supposedly launching at the same time, with a $350 MSRP. Performance is said to be comparable to a GeForce RTX 3060. And As for the middle GPU, the Arc A580 is said to be tentatively launching in July at a $280 MSRP, and will apparently be comparable in performance to a GeForce RTX 3050 (or thereabouts).
Intel's rumored pricing is lower than the current street prices of the presumed GeForce equivalents. GPU prices are coming down, though, so who knows what the market will look like in several weeks. Also interesting is that the sources claim Intel told its supply chain partners it's make quick work of improving its drivers, and they will continue to get better after launch.

It's going to be fun to watch everything play out. As things stand, NVIDIA is the top selling GPU brand on Amazon and Newegg, according to each one's own list of the best selling graphics cards. We'll see if Intel can crack the top 10 later this summer.

Tags:  Intel, (NASDAQ:INTC), intel arc, alchemist, arc a380, arc a750, arc a580
Show comments blog comments powered by Disqus
Follow Us:
What Are You Playing Now?