Intel has formally introduced its upcoming Arc A750 desktop graphics card, and with the introduction comes an initial set of internally run benchmarks comparing performance to NVIDIA's GeForce RTX 3060 in a handful of games. As you might imagine, the selected benchmarks shine a positive light on the A750 as a capable mid-range gaming card.
Whether that ends up being the case on a consistent basis is a question for another day (once we and other review sites have had a chance to put the A750 through its paces). During the video, Intel's Ryan Shrout candidly acknowledges that "the performance of Arc won't look like this in all games, but this demonstration of what Arc is capable of with the right game enablement and software engineering."
By that he means having polished drivers and optimized game code. Gaming is a bit of a symbiotic relationship between hardware engineers, the driver team, and game developers. AMD and NVIDIA have a head start in this regard as they've been churning out discrete GPUs for a very long time, though Intel isn't jumping into the pond as a completely new fish—it's the biggest GPU player when factoring in integrated GPUs. The difference now is that it's only been relatively recently since Intel began being hyper focused on gaming performance, with its Arc launch. 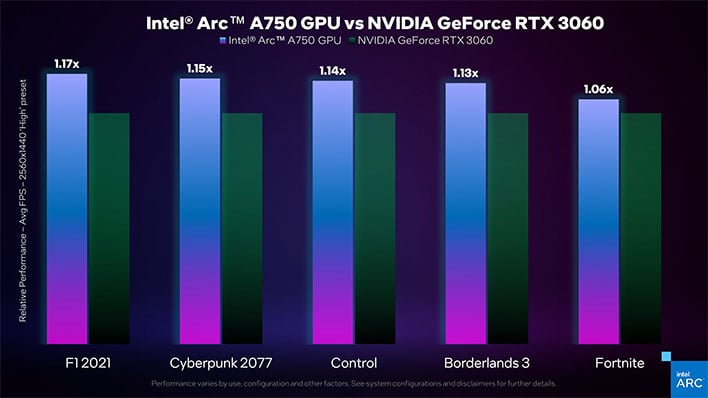 In the video, Intel shared a handful of benchmarks run at 2560x1440p with High image quality settings. The ones it shared show the Arc A750 beating the GeForce RTX 3060 by a modest margin in F1 2021, Cyberpunk 2077, Control, Borderlands 3, and Fortnite. The graph shows relative performance between the two cards, as opposed to specific frame rate data. Though Shrout did say it translates to up to 17 percent frame rates in favor of the A750. However, Intel shared more detailed numbers at the very end of the video... 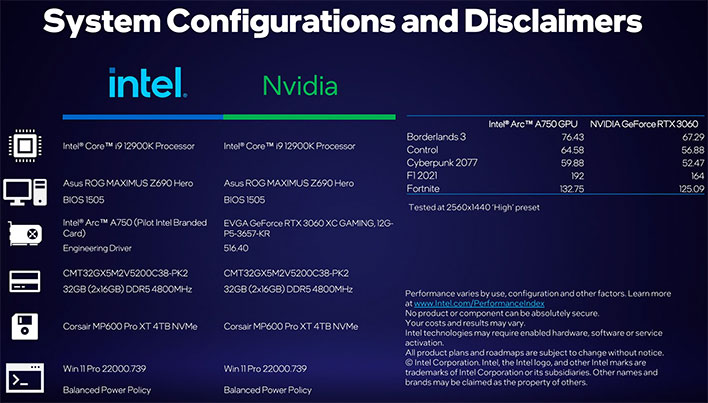 While there will likely be games where the 3060 comes out ahead, this is encouraging for what amounts to a first-generation product from Intel. Performance should improve over time as Intel's driver team and game developers hit their stride.
Unfortunately we don't get a ray tracing showdown with today's reveal, but we won't have to wait long—Shrout says it will be coming out "later this summer." In the mean time, Intel plans to continually upload videos showcasing its Arc GPUs.