As times goes on, we're getting a better look at Intel's first foray into discrete graphics in decades, as more Arc-powered laptops get released into the wild. It's been a staggered roll out with Intel starting the Arc party at the entry-level segment. However, higher end configurations have begun popping up overseas, resulting in a spattering of benchmark data to digest.
More on that in a moment, but let's talk about Intel's Arc lineup for a moment. Launching first on mobile, Intel at the end of March formally introduced five discrete GPUs for laptops spread across three overarching series—Arc 3 ("Enhanced Gaming"), Arc 5 ("Advanced Gaming"), and Arc 7 ("High Performance Gaming"). 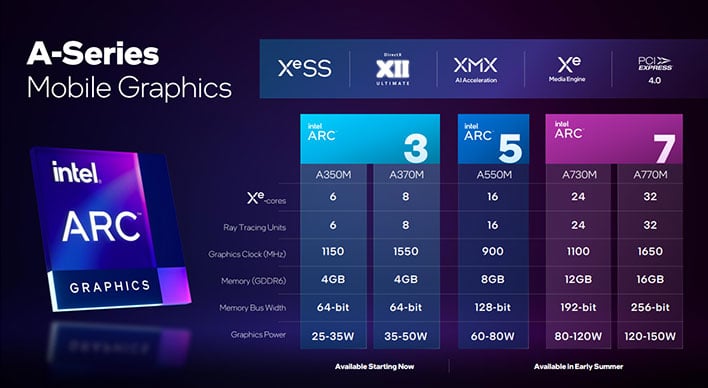 We've already seen some preliminary figures from the A370M, with the takeaway that Arc is off to a good start. But we're really curious to see what the Arc 7 series will deliver. Laptops based on the A730M and A770M are slated to arrive in early summer, and technically, the summer season begins on June 21. Overseas, however, laptops flaunting the A730M have already started to appear.
One of them is the 16-inch Mechanic Dawning Discovery Edition, priced at around $1,273 at JD.com. It sports a 12th Gen Intel Core i7-12700H processor with 14 cores and 20 threads, 16GB of DDR5-4800 RAM, and an Arc Alchemist A730M GPU.
The A730M itself wields 24 Xe cores with a 1,100MHz graphics clock, 24 Ray Tracing units, and 12GB of GDDR6 memory tied to a 192-bit memory bus.

A user at Weibo posted some benchmark data obtained from 3DMark Time Spy and a handful of games. While technically not a leak (since the laptop is available to purchase), we consider this an early look with the disclaimer that we have no idea what software configurations the user might have made, and what the driver status was when they ran these.
In any event, here's a look at the Time Spy benchmark... 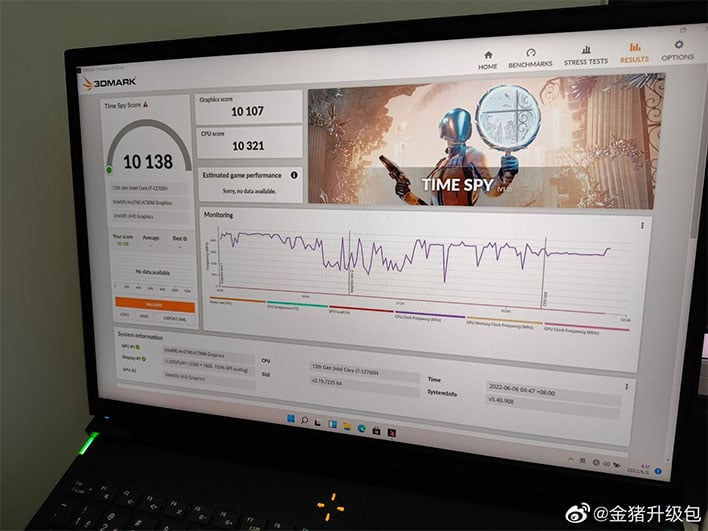 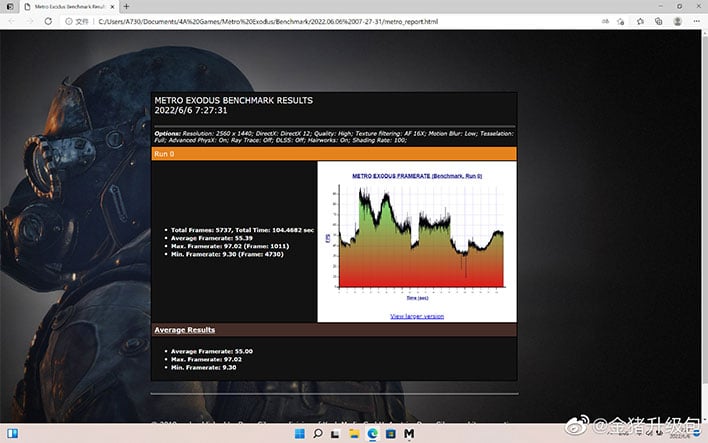 The same user posted three sets of game benchmarks—Metro Exodus, F1 2020, and Assassin's Creed Odyssey—each at 1440p and 1080p. Here's how it broke down...
Those results paint a different picture. Depending on the benchmark, in these games the A730M performed more in line with a mobile GeForce RTX 3050 and 3060.
Comparisons aside, these results show playable performance in a trio of games at both 1440p and especially 1080p. The A730M struggled a bit more in Assassin's Creed Odyssey, but was still playable at the Very High image quality setting. And in F1 2020 and Metro Exodus, it surpassed the 60 FPS threshold at 1080p.
We should reiterate that there are unknowns here, and specifically the state of the GPU driver. Software-side optimizations on Intel's side could see these results improve by a little or a lot by the time A730M laptops start shipping more earnestly. And of course we're relying entirely on someone else's data here. We'll reserve judgement until we've had a chance to check out the A730M for ourselves.