We know it's only a matter of time before Intel brings its Alder Lake architecture over to its Xeon stack. As we wait, a leaked blocked diagram may reveal an interesting change in how Intel will go about positioning and marketing its next round of server CPUs. It also provides details about the rich set of features they will bring to the table.
Let's start with the branding. The leaked chipset diagram was posted to Twitter by @momomo_us, and it didn't take long for someone to notice that it eschews any mention of a Xeon-W series. Instead, the diagram is labeled as, "12th Gen Core for WS." It's a minor detail at first glance, but could mean something bigger is afoot?
Here's a look at the diagram... 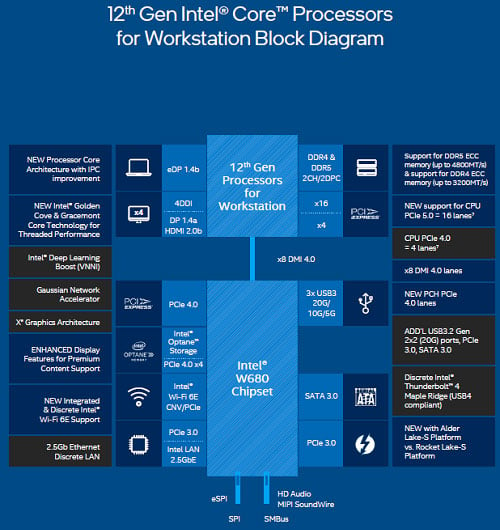 It's a lower resolution image, but we can still make out the text and list of features. And as spotted by @wild_cracks, Intel could extending its "W" Xeon designation over to its 12th Gen Core processor series, which could make for some interesting SKUs.

"Wait, '12th Gen Core for WS' instead of 'Xeon W-1400 Series'. So they're making a 'Core i9-12900W'? It seems they're really pivoting the 'Xeon W' brand to mean 'High End Workstation' instead of 'Processor with ECC Memory Support!', @wild_cracks commented.
That's assuming the slide is legitimate and properly labeled. Either way, the W680 chipset appears very similar to Z690 for Alder Lake. We're looking at support for both DDR5 (up to 4800 MT/s) and DDR4 (up to 3,200 MT/s) ECC memory, 16 PCIe Gen 5.0 lanes, four PCIe Gen 4.0 lanes, and various display connectivity options.
The diagram also points to Alder Lake goodies like Deep Learning Boost (VNNI) and Gaussian Network Accelerator (GNA), both of which could come in handy for certain workstation workloads.
One thing not detailed in the block diagram is whether Intel will enable AVX-512 on its mainstream Alder Lake Xeon processors. This is a feature that is disabled on Intel's consumer Alder Lake chips, though MSI added the option to at least one of its motherboards (MEG Z690) for those who really want it.
In any event, it seems a launch is imminent. The timing of this block diagram leak comes just a few weeks after a retailer posted listings for a couple of Supermicro W680 motherboards.