Each passing day brings us a little bit closer to Intel's upcoming Alder Lake launch. We know Alder Lake arrive before the end of the year, assuming Intel sticks with its stated release schedule, but details about different SKUs will have to wait. Official details, that is—unofficially, the leaks and rumors scene has been a goldmine of sorts, and as we head into the weekend, a couple of mobile Alder Lake parts have surfaced online.
The stars of the latest benchmark leaks are a couple of Alder Lake-P processors. This is the designation given to Intel's mobile Alder Lake stack. Like the desktop variants (Alder Lake-S), they are manufactured on an enhanced 10-nanometer SuperFin process, combing high performance (or big) Golden Cove cores with power efficient (or small) Gracemont cores.
Intel's adopting a hybrid architecture, which has worked out supremely well for Arm in the mobile space (with its big.LITTLE marketing name). We'll see how does in the x86 space, but from the leaks that have materialized thus far, Alder Lake is promising. Earlier this week, for example, a supposed Core i9-12900K Alder Lake QS performance leak showed the chip outpacing AMD's flagship Ryzen 9 5950X in Cinebench R20.
As to the mobile CPUs that are the subject of today's leak, one is an entry on Geekbench, as part of an HP-brand laptop. Have a look... 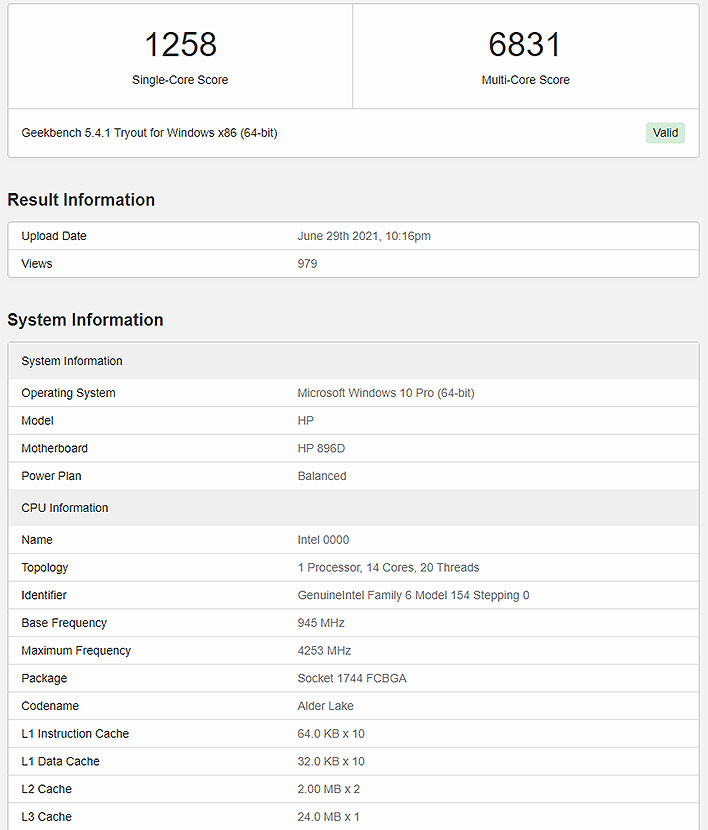 Geekbench was not able to identify the SKU, though it did spy 14 cores and 20 threads, with a 945MHz base clock and 4,253MHz turbo frequency, along with 24MB of L3 cache. What that boils down to is 6 big cores with Hyper Threading support and 8 small cores, to arrive at 14 physical cores (6 + 8) and 20 threads (6 + 6 +8).
The chip posted a single-thread score of 1,258 and a multi-threaded score of 6,831. Looking at Geekbench's roundup of average scores, these results are not super impressive. The single-core score is roughly in line with a Core i5-1135G7 (Tiger Lake), while the multi-core score is on par with the Core i9-10885H (Comet Lake).
Clock speeds, immature drivers, and a host of other factors could attribute for the ho-hum scoring. Whatever the case might be, these are not bad scores, just likely not representative of the type of gains we will see from the new architecture when it officially arrives.

Then over at Userbenchamark, another Alder Lake-P chip made an appearance. It is shown as an 8-core/12-thread CPU, which likely means 4 Golden Cove cores with Hyper Threading support and 4 Gracemont cores.
This is also in a HP system. It posted a single-core score of 160 (around 3.6 percent less than an AMD Ryzen 7 5800X) and a multi-core score of 1,054 (around 39.3 percent lower). That's not surprising, since the Ryzen 7 5800X has more threads to work with, and faster clocks too, if we're putting stock into the reported 1,000MHz clocks (base and boost, though it's probably not being read correctly) for the Alder Lake-P part.
Finalized silicon will need to perform better than these benchmarks show, for Alder Lake to be interesting. Fortunately for Intel, other leaked benchmarks have shone a brighter light on the upcoming architecture.