Data from a major retailer in Germany shows that Alder Lake is already helping Intel regain some of the market share it gave up to AMD. That retailer is MindFactory, and looking at the sales data for the past month, Intel has finally climbed above 30 percent for the first time since AMD released its Ryzen 3000 series (followed by its Ryzen 5000 series).
There are different ways to look at this. One is that AMD is still crushing Intel in CPU sales at MindFactory. That's notable because the online retailer is not an also-ran, but the largest one in Germany. Even though sales data from a single e-tailer is not necessarily indicative of the market as a whole, it is still interesting to dissect the numbers. 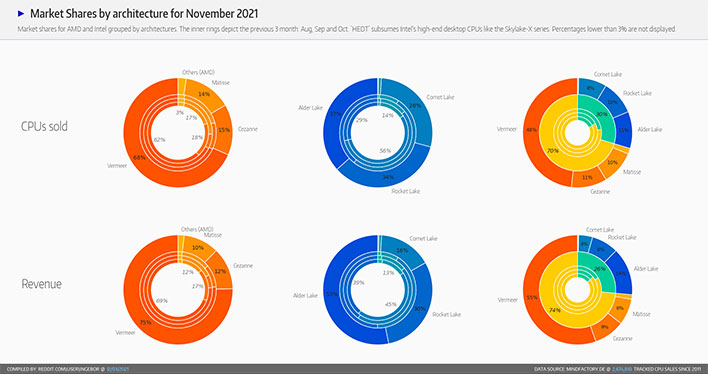 To do that, Reddit user ingebor compiles sales data every month and plots it out in a bunch of charts and graphs. And what we see for November is AMD commanding 70 percent of CPU sales at the retailer, and Intel accounting for the other 30 percent. Also interesting, AMD's Ryzen 5000 series (Zen 3, Vermeer) is beating Intel's entire stack all by itself, with a 48 percent share of all CPUs sold.
So that's one way to digest the numbers. Another way is to look at the impact Alder Lake is having on Intel's position in the short going. Alder Lake has only been out a month and it's already helping Intel chip away at AMD's sales lead (which again, we're only talking about MindFactory here, not the market as a whole).

That's an impressive achievement. It would be interesting to see how many of those Alder Lake CPUs went into DDR5 platforms, given that DDR5 memory is rather scarce and carriers a pricing premium over DDR4. It's also notable that the only chipset in town for Alder Lake is Z690. It is entirely conceivable that once more chipsets enter the mix, Alder Lake will give Intel another boost.
Among Intel's CPU architectures, Alder Lake is already outselling Rocket Lake at MindFactory, though it's close—Alder Lake accounted for 37 percent of all Intel CPU sales in November, while Rocket Lake accounted for 34 percent. The remaining 28 percent were Comet Lake chips.

In terms of the revenue split, the gap between AMD and Intel is a little bit bigger—AMD's Ryzen CPUs generated 74 percent of CPU revenue last month, versus 26 percent for Intel's CPUs. The Ryzen 7 5800X was the biggest earner, followed by the Ryzen 5 5600X, Ryzen 9 5900X, Ryzen 9 5950X.
The revenue split hasn't always tipped in AMD's favor, and especially not this favorably. However, AMD's product stack is certainly good enough to warrant and fetch higher prices compared to some of the company's past silicon.
It will be interesting to see what the next several months bring, in terms of the sales split. Cheaper chipsets could bolster Intel's position, as could better availability of DDR5 memory. Meanwhile, AMD will soon release refreshed Zen 3 processors with stacked 3D V-cache.