Intel hasn't shied away from sharing its longer term roadmap as it looks to regain process leadership, both in the near future and into the so-called angstrom era. The further down the roadmap we travel the less details Intel shares, but we at least get a rough outline of what's in store. And looking just past Raptor Lake, Intel will pivot to a smaller node for its 14th Gen Core Meteor Lake processors.
Skeptics will wonder if Intel can maintain the aggressive pace of innovation it's set before itself, and that's a fair question after witnessing the stumble to 10 nanometers. Remember Cannon Lake and the hype that preceded it? That's all now in the past and as we've seen with Alder Lake, Intel has regained its footing as it looks to sprint ahead.
To that end, a fresh Digitimes reports claims that the chip maker's Intel 4 node is on track for volume production in the second half of 2022. That was always plan (Intel bragged in April that it powered up a Meteor Lake CPU and booted to Windows), but what the unofficial update suggests is that Intel has not run into any snags, last minute or otherwise. That's important as Intel gets ready for a node shrink. 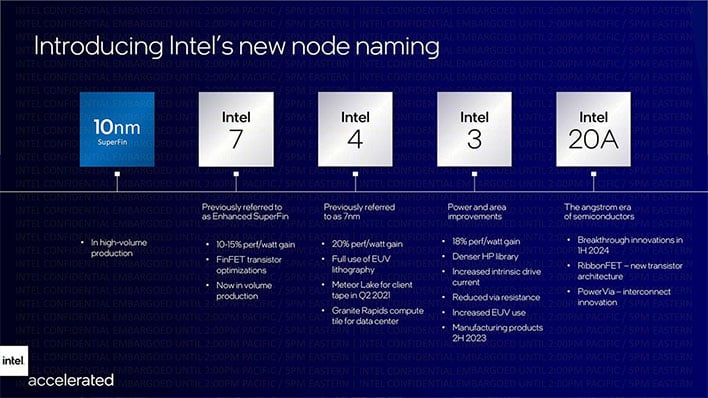 Where things can get confusing from the outside looking in is with the node naming scheme. Intel shifted to a new naming scheme around this time last year, starting with Intel 7 for Alder Lake. Intel 7 had previously been referred to an 10nm Enhanced SuperFin. And looking ahead to Meteor Lake, the Intel 4 node was previously referred to as 7nm.
Part of the reason for the shift is because nodes from one manufacturer and another are not created equal. From a very high level overview, that's to say that Intel 4 (7nm) is not the same as TSMC's 7nm node that AMD's Zen 3 chips are based on.
The shift to Intel 4 is a big deal for Intel. It represents the first full node shrink since Intel rolled out its new labels, and it comes with some big performance claims. For example, Intel says it will deliver a 20 percent performance per watt improvement over Intel 7, or enable 40 percent less power at the same clock frequency. This will also be Intel's first node to make full use of EUV lithography.
Another notable aspect of Meteor Lake is a shift to a chiplet makeup with a flexible tiled architecture (graphics, CPU cores, and I/O are on a separate die). Interestingly, the CPU tiles are fabricated by Intel while TSMC is making the GPU tiles. We still don't know what the desktop configurations will look like, but on mobile, we're likely looking at 6-8 Redwood Cove P-cores, 0-16 Crestmont E-cores, and Battlemage integrated GPUs with up to 192 EUs.
For lots of reasons, Meteor Lake is a bigger jump in architecture from Raptor Lake, than Raptor Lake will be to Alder Lake. So it's nice to apparently learn that Intel 4 volume production is on track.