Preliminary retail pricing has started to appear for Intel's upcoming Rocket Lake-S processors, with pre-order and placeholder listings giving us an idea of where the next-gen chips might land. There are more than a dozen listings for Intel's 11th Gen Core desktop chips, ranging from the Core i5-11400F on up to the flagship Core i9-11900K.

Of course, early listings from vendors outside of the usual suspects (Amazon, Newegg, and the such) are not always indicative of how pricing will shake out more broadly. But until Intel releases MSRPs and/or more vendors chuck up their own pre-order pages for Rocket Lake, these will have to do. So, what are we looking at?
There are at least two retailers who have jumped the gun. One is Mindfactory, which is accepting pre-orders for the Core i7-11700K priced at €469. That works out to around $569 in US currency.

The listing only mentions a 5GHz clock (turbo, undoubtedly), but based on other leaks (including a recent Core i7-11700K performance preview), this is expected to be an 8-core/16-thread processor with a 3.6GHz base clock and 16MB of L3 cache.
Even with Intel promising a 19 percent jump in IPC (instructions per clock) performance and upgraded features like PCI Express 4.0 support and faster memory, the asking price in this listing is surprisingly high. As a point of comparison, Mindfactory charges €317.50 (~$385) for the current-generation Core i7-10700K. And here in the states, you can snag one from Amazon for $326.74 right now.
Fortunately, it does not look like the Core i7-11700K will broadly sell for what this listing indicates. We say this because it is also listed at Milwaukee PC, but for $484.99. That's still expensive compared to the going rate for the Core i7-10700K, though not $569-expensive. 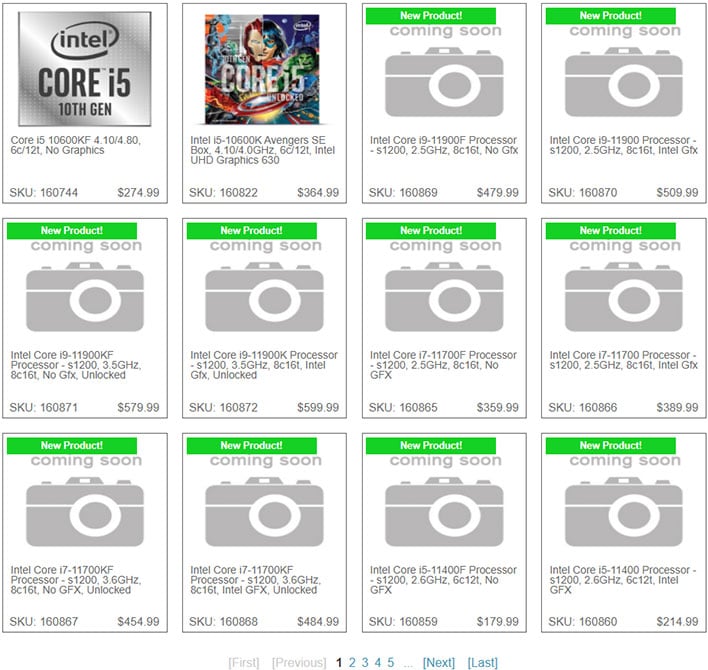 Milwaukee PC is not taking pre-orders yet, but it has tossed up a whole bunch of placeholder listings for several Rocket Lake-S SKUs. Here's how it breaks down...
These prices are probably closer to what Rocket Lake-S will command across the board, though obviously we cannot say for sure just yet. As it stands, it looks like the flagship 8-core/16-thread Core i9-11900K will cost around $600. That's around $100 more than the 10-core/20-thread Core i9-10900K's MSRP, and even more if comparing to discounted street pricing.
Whether the above pricing holds true when Rocket Lake-S launches, we can only wait to find out. Regardless, it's probably safe to assume Rocket Lake-S will cost more than the Comet Lake-S processors they are replacing, it's just a matter how much more. We'll find out in a few weeks—Rocket Lake-S is expected to launch towards the end of March.