Intel continues to flesh out its mobile processor line with new SKUs, like the recently introduced Tiger Lake-H family for high-powered laptops. It is also planning to launch refreshed Tiger Lake-U processors, otherwise known as Tiger Lake-R, with ultra-lower power specifications for thin and light laptops. Intel has yet to formally introduce those models, but a pair of MSI laptop listings highlight a couple of the upcoming SKUs.
Officially, all we know about Tiger Lake-R is that it is coming, with processors slated to arrive sometime this year, and that the power target will be 15-28W. Beyond that, it is anyone's guess as to exactly when the new laptop processors will arrive, how many SKUs there will be, and what the full specifications will look like for those SKUs. MSI may have partially answered some of those questions, though.
A pair of 16-inch MSI Summit E16 Flip Evo laptops are listed at Xotic PC, one with a Core i7-1195G7 and the other with a Core i5-1155G7. Here's a look at the higher end model... 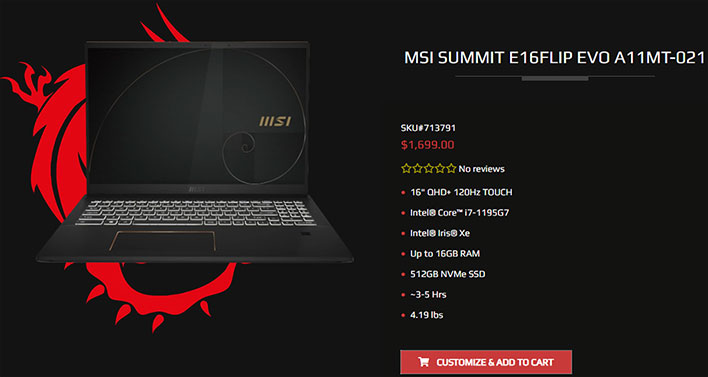 Clicking the 'customize' button reveals some additional details about the CPU. Specifically, it lists the Core i7-1195G7 as being a 4-core/8-thread processor with a 2.9GHz base clock, 5GHz max turbo frequency, and 12MB of L3 cache. As a point of reference, the Core i7-1185G7 is also a 4-core/8-thread processor, but is clocked at 3GHz to 4.8GHz when configured at 28W. So, the higher end SKU nets a 200MHz bump at the top end.
The listing also indicates onboard Intel Iris Xe graphics with 96 execution units and, as configured at the $1,699 starting price, along with 16GB of LPDDR4X memory and a 512GB NVMe SSD. As for the 16-inch display, it sports a 2560x1600 resolution, 120Hz refresh rate, and touch support. The high refresh rate is nice, but taking full advantage of it will be tough without a discrete GPU in the mix (which does not appear to be an option.
Here's a look at the other listing... 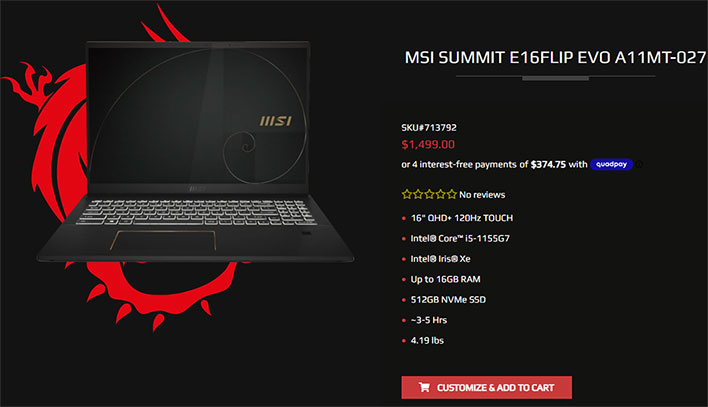 This one shows a Core i5-1155G7, which is erroneously listed as a 6-core/8-thread CPU. We're not going to see oddball core and thread counts until Alder Lake arrives, as the upcoming architecture will pair high performance cores with power efficient core in the same package
The Core i5-1155G7 is actually another quad-core processor with eight threads. Assuming the rest of the listing is correct, it checks in at 2.5GHz for the base clock and 4.5GHz for the top turbo frequency, and wields 8MB of L3 cache.
As for the laptop itself, the other specifications are the same (16GB RAM, 512GB SSD, QHD+ 120Hz display), with a starting price of $1,499.
Both laptops are up for pre-order, with the ETA listed as July.