Intel has been busy refreshing its CPU product lines across virtually every segment, including high-performance desktops and servers, and various tiers of mobile. In particular, Intel's Comet Lake architecture has found its way into both desktop and mobile applications. Building on its 10th generation Core foundation, Intel today announced a new round of vPro processors based on Comet Lake.
These are not necessarily new processors (more on that in a moment). Instead, vPro is an entire platform of hardware and software with specific technologies aimed at enterprise and IT customers. It's essentially the combination of a CPU, chipset, network controller, and software that offers certain security and management features of interest to IT admins and enterprise environments.
Intel refreshes its vPro lineup with each new generation of processors, so it was only a matter of time before Comet Lake stepped into the fray. That day has come.
So, what are we looking at here? Let's start with the desktop lineup... 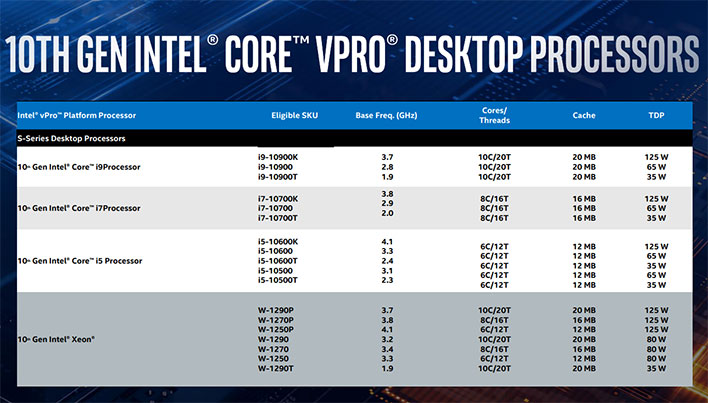 Intel's spectrum of vPro options now span several desktop processors, including Core i5, Core i7, and Core 9 SKUs. This culminates in Intel's flagship Core i9-10900K processor, a beastly 10-core/20-thread chip with a 3.7GHz base clock and up to a 5.3GHz boost clock, along with 20MB of Intel Smart Cache and a 125W TDP.
There are also several 10th generation Xeon processors thrown into the mix, which also spans to 10 cores and 20 threads. 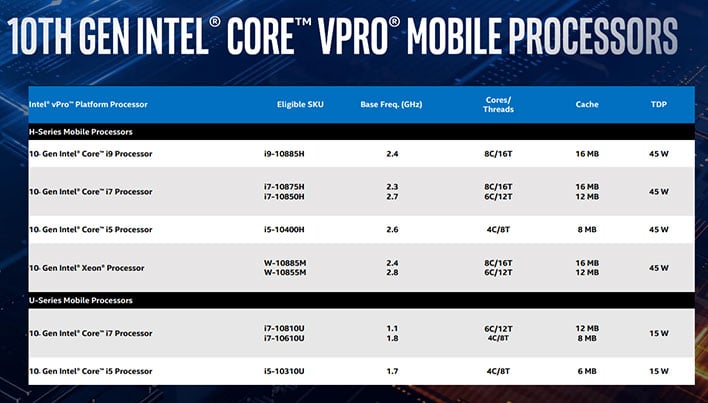 On the mobile side, Intel is giving the vPro treatment to certain high-performance Comet Lake-H and lower power Comet Lake-U series CPUs.
Savvy viewers will notice the Core i9-10885H processor at the top of the chart. Up until now, Intel has not formally introduced such a part, though it's been leaked and rumored prior to today. It's also the top offering in the mobile vPro stack, with 8 cores and 16 threads clocked at 2.4GHz, with 16MB of cache. Intel's chart doesn't mention a boost clock, though previous leaks had it pegged at 5.3GHz. 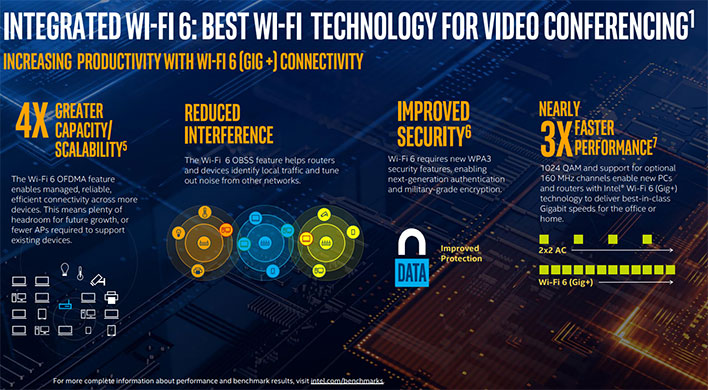 One of the key features of Intel's 10th generation vPro platform is integrated Wi-Fi 6 (802.11ax) connectivity. This is the latest generation of Wi-Fi, and it brings with it several improvements over Wi-Fi 5 (802.11ac).
The biggest benefit comes by way of OFDMA support. In simple terms, this is what makes Wi-Fi 6 better suited to handle traffic from multiple connected devices at the same time. The caveat is that you need a Wi-Fi 6 router and devices with Wi-Fi 6 adapters to take full advantage of the technology. Any laptop or desktop that bears the 10th gen vPro badge will have the latter.
There are other benefits as well, such as improved security, lower latency, and potentially better battery life (in laptops) and performance.

Intel also highlights what it calls "Intel Hardware Shield" technology on its latest vPro platform. This entails "out-of-the box protection to help defend against firmware attacks," in part by locking down the memory in the BIOS. it also ensures that the OS and virtual environment are running directly on legitimate Intel hardware.
You can expect to see laptops and desktops built around Intel's 10th generation vPro platform soon from the usual suspects.