Instagram Spooks Users With A Wave Of False Suspensions On Halloween

Millions of users of the Instagram photo-centric social media platform have had their accounts suspended today. Rather than any policy change on the part of Meta-owned Instagram, the suspensions appear to be the result of technical difficulties. The massive wave of suspensions coincides with the Instagram app repeatedly crashing and generally being unusable. However, recent reports suggest things are improving, with more and more users regaining access to previously suspended accounts as the day progresses.


This morning, the aforementioned millions of Instagram users received a common message stating, “We suspended your account on October 31, 2022.” The message was accompanied by what looked like a selection of possible explanations, but since Instagram has now officially acknowledged it is “having issues,” and apologized, users of the social media site / app should probably not pay too much heed to the “What does this mean?” and “What can I do?” advice accompanying the suspension. Most worryingly, the message implied that if a user didn’t successfully appeal their suspension within 30 days, their account would be wiped. 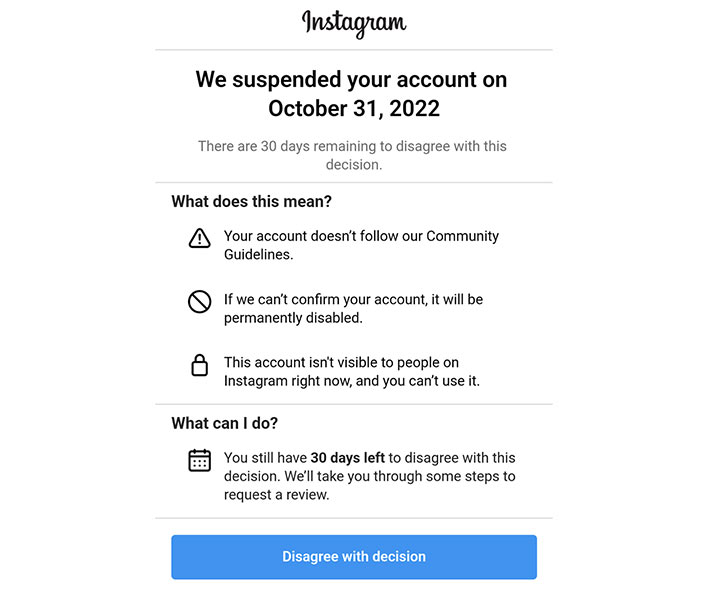 Above, you can see the Instagram alert received by Hot Hardware alumna, Brittany Goetting. The alert was received in the wake of one of her infrequent postings. Thus, before the Twitter admission from Instagram regarding its technical issues, Brittany thought there was potentially something about the image that triggered a filter / alert / suspension from Meta’s servers.

At the time of writing, incidences of reports of Instagram being down continue to fall, and things seem to be returning to normality. For example, Brittany’s page is again reachable and has improved from being blank, to being fully populated with previously posted images returning to the grid over the last hour.

Ahead of the suspension emails, some managed to notice a problem was brewing, with some of the most popular accounts noticing follower counts dropping by thousands, or even millions. We hope things get back to normal soon for all affected users of this social network.