As many of you know, not all budget gaming headsets are created equal. One of the more popular offerings has been HyperX's Cloud Stinger due to its balance of price, performance, and comfort. HyperX is hoping to offer the same combination with a follow-up model, the Cloud Stinger 2, which maintains a relatively low price tag while introducing some key upgrades (also see our Cloud Alpha review if you're in the market for a higher end wireless headset instead).

Looking at the renders and photos, this second iteration gets a welcome makeover from the original model that launched in 2016. The first iteration, while still serviceable, looks dated in comparison to many headsets that have come out in the past year or so. HyperX addresses this with the Cloud Stinger 2 with a sleeker design, though not the expense of functionality. 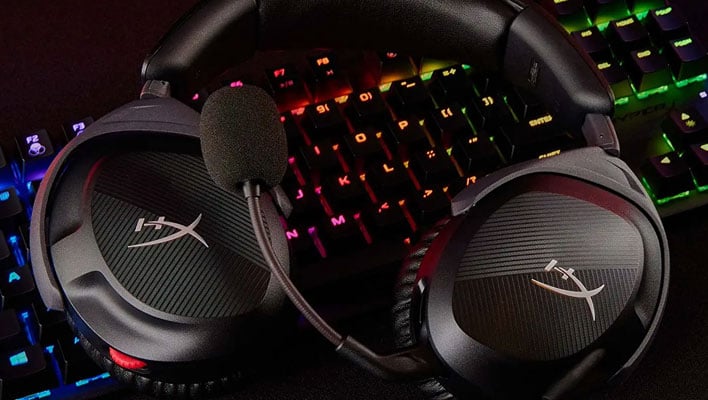 Aesthetics, after all, are (or should be) secondary—function over form, in other words. To that end, HyperX opted for a series of refinements rather than a wholesale change to its popular headset. The Cloud Stinger 2 is still lightweight at under 300 grams, and the earcups can still be rotated 90 degrees for a more customizable fit (and added comfort when dangling the headset around your neck).
Large 50mm drivers are also part of the package, though HyperX says they've been refined for "clearer audio." Part of what that translates into is a broader frequency response—HyperX advertises a range of 10Hz to 28kHz, versus 18Hz to 23kHz on the original model.
HyperX also added DTS Headphone:X Spatial Audio for improved 3D audio spatialization and localization accuracy, the company says.
"Bringing a new and improved addition to our popular selection of Stinger headsets, we are excited to expand the lineup with the Cloud Stinger 2," said Nate Almond, audio business manager, HyperX. "Offering another top-quality headset option packed with impressive features for both function and comfort, Cloud Stinger 2 stays true to its lightweight predecessors’ quality and comfort at a low price point – now with DTS Headphone:X audio for more enhanced in-game immersion."
Perhaps best of all, the Cloud Stinger 2 still falls into budget territory. It's available now on Amazon for $49.99. And if you can do without the upgrades, you can score a dynamite deal on the original Cloud Stinger, which is now on sale for $24.99 on Amazon, half off its original MSRP.