NASA's Hubble Space Telescope captured an intruder in one of its images as the space agency attempts to fill in the gaps of the Milky Way. When the project was first proposed, 75% of all the Milky Way nearby neighbors had been imaged by Hubble. The project aims to use the gaps between longer Hubble observations in order to fill in the final 25%.

At first glance, the image shared by the European Space Agency (ESA) and NASA seems fairly typical. One can see a variety of galaxies in the background and bright foreground stars filling in dark space. At the center of it all is galaxy UGC 7983, which appears as a hazy cloud of light. The galaxy is about 30 million lightyears from Earth and is part of the constellation Virgo.

UGC 7983 is a dwarf irregular galaxy. Dwarf galaxies are typically home to just a few billion stars, unlike their larger cousins which can be home to hundreds of billions of stars. These smaller galaxies are believed to have been created by gravitational forces in the early stages of the creation of larger galaxies that they orbit, or as a result of collisions between galaxies. Normally, this would be the highlight of an image. However, it was an "astronomical interloper" that was detected in the upper left-hand corner trying to sneak by that stole the show. 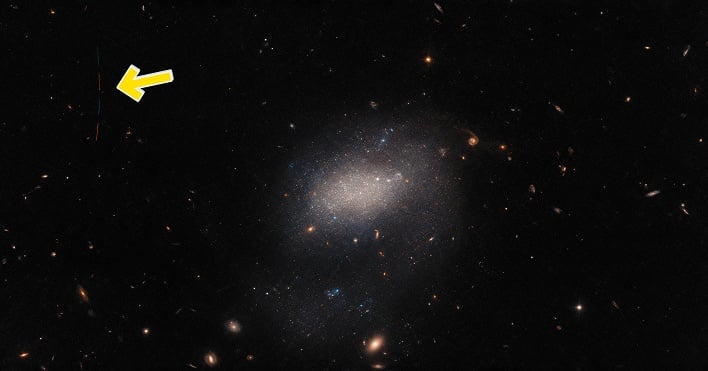 
The streak of light is actually a small asteroid, about a few kilometers across. When focused on, the asteroid's trail is seen as four streaks of light separated by small gaps. The four separate streaks indicate the four separate exposures that were combined to make the image, according to ESA. The four different exposures were necessary to change the filters inside Hubble's Advanced Camera for Surveys.

ESA says that capturing an asteroid "was a fortunate side effect of a larger effort to observe every known galaxy close to the Milky Way." The project is an excellent way of filling in gaps in Hubble's observation schedule, as well as gaining more knowledge of nearby galaxies.