NGC 1156 is not like many other galaxies known to Hubble. While its thousands of brilliant stars conjure up thoughts of a spiral galaxy, it lacks the characteristic "winding" structure. It also shares the same radiant diffused glow of an elliptical galaxy and its core of older, redder stars. 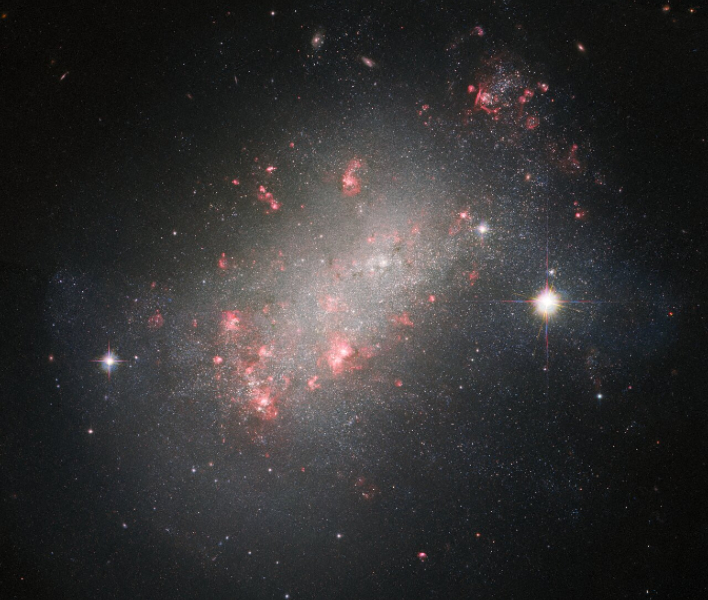 A spiral galaxy normally has a rotating disc with spiral "arms" that curve out from a compressed central region. An example of a spiral galaxy is our own Milky Way. Elliptical galaxies typically have an even, ellipsoidal shape. There are four classes attributed to galaxies: spiral; barred spiral; elliptical and irregular. NGC 1156, while having characteristics of both a spiral and elliptical galaxy, is classified as an irregular galaxy.

The irregular dwarf galaxy is located 25 million light-years from Earth in the constellation Aries. Its shining red blossoms scattered across the image indicate areas of intense star formation, which also fuels the galaxy's enormous energy. The red glow comes from the ionized hydrogen gas outflows from the young stars.

While NGC 1156 has been captured by Hubble in past images, the latest image is part of a program known as Every Known Nearby Galaxy, which is attempting to fill a gap in galactic observations.

"Astronomers noticed that only three quarters of the galaxies within just over 30 million light-years of Earth had been observed by Hubble in sufficient detail to study the makeup of the stars within them," according to the ESA posting. "They proposed that in between larger projects, Hubble could take snapshots of the remaining quarter, including NGC 1156. Gap-filling programs like this one ensure that the best use is made of Hubble's valuable observing time."