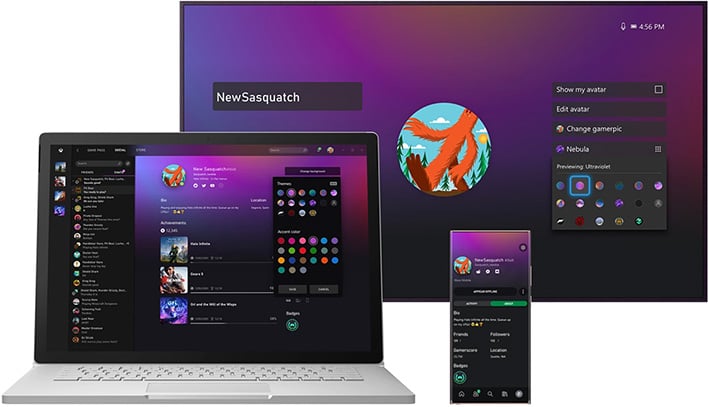 Microsoft is offering up a glimpse of the upcoming overhaul headed to the Xbox dashboard, which should arrive in earnest when the Xbox Series X launches in November. It is a visually sleeker design, and one that promises to be "faster to use," according to Microsoft. The overhaul will also be shared on other devices for a unified experience.
"The new Xbox look and feel is designed to be faster to use, more approachable and visually appealing. This holiday it will be shared across all Xbox mobile apps, Xbox Game Pass on PC, and of course Xbox One and Xbox Series X consoles," Microsoft announced in a blog post. Text is more readable, elements on screen are easier to understand at a glance, and accomplishing your tasks is faster than ever."
It seems Microsoft is applying a coat of paint to just about every facet of the Xbox dashboard, including the tile shape and fonts, along with an updated illustration style, and more. Microsoft says it will still feel familiar to users who are accustomed to the current dashboard, just "more focused" with some update features and added visual flair.

According to Microsoft, the Home screen will load 50 percent faster when you boot up the Xbox, and will load 30 percent faster when returning from a game. From our reading, that speed claim is tied to the Xbox Series X with its more powerful components and, importantly, its SSD paired with Microsoft's Xbox Velocity Architecture. Microsoft also said the improvements will consume 40 percent less memory.
Part of the overhaul includes a bigger emphasis on mobile, via the Xbox mobile app. That's because some things are inherently faster to accomplish on a smartphone than they are through a controller.
"For example, when you choose to share an update or game clip from your console, it will also automatically be sent to your Xbox mobile app, so you can share it on the social networks of your choice," Microsoft explains.
It is also easier to send text messages to friends through the mobile able than it is to navigate on the onscreen keyboard. Likewise, the new mobile app lets you launch parties. And with consolidated notifications, you'll see activity across mobile, PC, and console. Part of this emphasis also stems from Microsoft wanting players to share their experiences on social networks.
These updates will start to roll out in the coming weeks, though Microsoft did not say which ones will arrive first.