Hey iPhone, Pixel 6 Has A Magic Eraser Camera Feature, Can You Do That?

Google is set to launch the Pixel 6 and it has a focus on delivering perhaps the biggest camera overhaul the lineup has seen to date. Google has been a leader in terms of cell phone camera innovation, and now they are once again pushing the envelope with a new feature called the "Magic Eraser," which may even leave Apple iPhone users a bit envious.

The Pixel 6 and 6 Pro are both going to include a 50MP primary sensor that Google says can capture 150 percent more light compared to what was in the Pixel 5. The new sensor is indeed larger than its predecessor and a bigger sensor leads to better low light pictures and natural bokeh (background blur). The Pixel 6 Pro will also have a 12MP ultrawide camera and a 48MP 4x telephoto camera.

Google is going to take advantage of all those gorgeous pictures taken with that larger sensor with the new Magic Erase feature. Leaked last month without clear details, Magic Eraser is now said to have the ability to remove "stranger and unwanted objects."

Apparently, the new feature will be powered by Google Photos and "“may not work on all image elements." A photo shown on 9to5 Google gives an example of what can be achieved with the Magic Eraser feature. 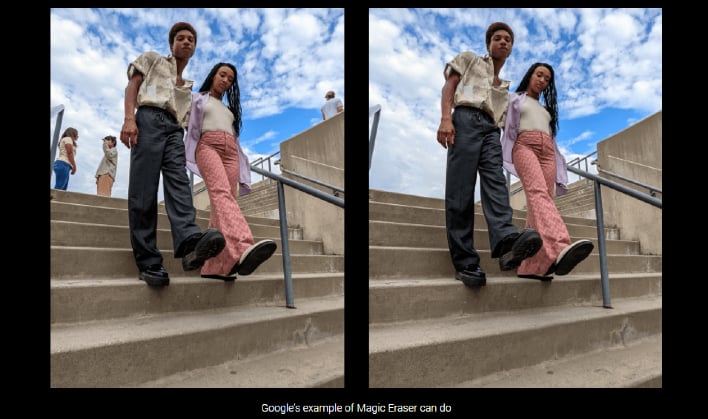 The Pixel 6 will not have the 4x telephoto camera found on the Pro and reportedly will have an inferior selfie camera. A 94-degree FOV (Field of View) selfie camera is mentioned for the Pro version but not on the base model. Other notable features are "Face Deblur" and "Motion Mode" which should "“add extra depth" to a photo giving a sense of motion.

According to Google Store, Pixel 6 phones are coming October 19th. You can go to Google Store and sign up to be notified exactly when the Pixel 6 becomes available to order.