The Hennessey Venom F5 Revolution is the most powerful and visceral pure-combustion hypercar in the world. This powerful beast is capable of reaching breakneck speeds in excess of 250mph.

The Venom F5 Revolution is based on the Hennessey Venom F5 Coupe, with the two sharing nearly identical specs. However, the track-focused version of the Venom F5 is comprehensively re-engineered for increased agility, uncompromised handling, and high downforce. Along with re-worked aerodynamics, suspension, engine cooling, and digital telemetry, the race-honed model is scaled down in weight to below 3,000 pounds.

Powering this beast is Hennessey's twin-turbocharged, 6.6-liter, 'Fury' V8 engine rated at a mind-boggling 1,817bhp. With its low body weight, the Venom F5 Revolution is capable of astonishing acceleration. The engine block is made of cast iron, the connection rods are made of forged steel, and the exhaust wheel is made of stainless steel.


The engine will create a peak power of 8200rpm, with a maximum of 1193 pound-feet of torque at 5500rpm. The rear wheels will receive power from an automated single-clutch transmission and a limited-slip differential.

Carbon-ceramic brakes are standard and feature multi-piston calipers, giving drivers the peace of mind of being able to slow this blazing-fast car down after reaching those high-end speeds. 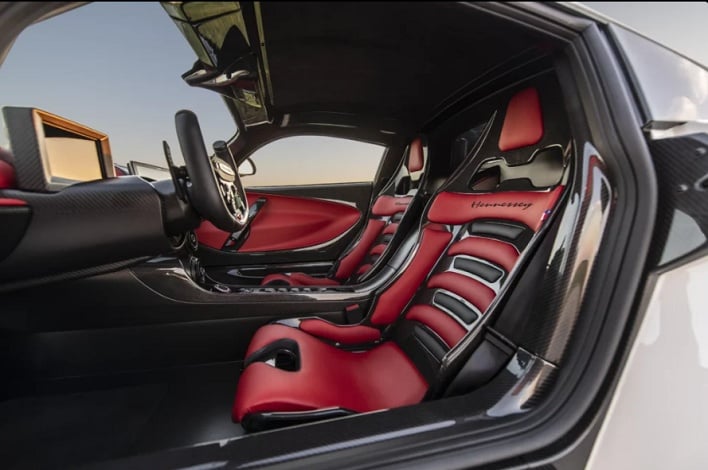 The interior is designed for minimal distractions while promoting maximum driver visibility, tactility, and functionality. Drivers will feel as if they are seated in the cockpit of a fighter jet, complete with a yoke for steering. Speaking of seating, the carbon-fiber bucket seats are cushioned with leather-clad pads that adhere to the "function defines form" design philosophy. The bespoke carbon-fiber steering wheel is designed to maximize driver visibility of instrumentation and the road ahead.

Only 24 of the F5 Revolution will be produced, with a price tag starting at $2.7 million. In comparison, the regular F5 Venom asking price was $2.1 million.