Hear Doom Like Never Before In Full 16-Bit SoundBlaster Goodness

These days, video game audio is so complex that it's actually simple. Computer processors and audio hardware are advanced to the point that everything can simply be multi-channel digital audio. Game sound effects and music tracks are just digital samples; digitized recordings of real-world sounds. Digitized audio has been around a long time—all of Doom's sound effects are digitized sounds—but it's only relatively recently that games have started to use it for all types of audio.

Earlier computers didn't have the processing power, memory, or storage to be playing back lots of streams of digital audio. Game consoles even before the Nintendo Entertainment System could play back digital audio, but were usually limited to a single low-quality stream. Even at that, the expensive ROM-based cartridges simply didn't have space for much audio in the uncompressed formats required. Games would have a few samples, but they were scratchy and very short.

To produce most of their audio, early game systems instead used tone generators, noise generators, and later, FM synthesis chips. FM synthesis is a method by which a computer chip can generate a wide variety of tones and sounds by modulating the frequency of the signal—thus "Frequency Modulation Synthesis". Using a few simple computer instructions, an FM synth can produce a huge variety of tones and sonic textures.


If you've enjoyed games on a Sega Genesis or music played on a Sound Blaster card, the buzzy sound of FM synths should seem instantly familiar to you—although digital synthsizers, particularly from Yamaha, were also a key part of the "feel" of pop music in the 1980s. Cost-reduced versions of those very same Yamaha synthesizer chips were used in all kinds of computers in the late 1980s and through the early-to-mid 1990s.

In fact, the first really widespread PC-compatible sound card was the AdLib, which used a Yamaha OPL2 synthesizer on-board. Most later sound cards, including the even-more-popular Sound Blaster, were AdLib-compatible, meaning that they also included an OPL2 chip on the card. The OPL2 wasn't capable of digital audio playback; the Sound Blaster and other cards used separate hardware for that.


Early PC games with sound capability were often created specifically with the AdLib hardware in mind. They didn't make use of digital sounds, but instead, played back carefully hand-crafted tones intended to emulate the sounds intended for the game. Music, likewise, would be painstakingly programmed while taking into account the full capabilities of the FM synthesizer hardware. This was common, expected even in console and arcade games, but pretty new for the PC market. After all, PCs at this time were still considered stodgy business machines, not game systems.
As time went on, some composers were less satisfied with the capabilities and requirements of using FM synthesizers, and wanted to use more natural sounds in their music without having to learn to program, too. Enter the MIDI format. MIDI stands for Musical Instrument Digital Interface, and it's a complex technology by which music played on a real instrument can be saved to a computer in a digital format that represents the actions of the musician, not a recording of the sound produced.

MIDI wasn't new; it was created in 1983. However, what was new in the early 1990s was the appearance of affordable sound cards like the Gravis Ultrasound that could perform "wavetable synthesis." This is a method of playing back music where you have a set of waveform samples—digital audio sounds—that are used to represent instruments, and then you play back a sequence of notes (such as a MIDI file) using those samples.


The thing is, composing for FM synthesizers is a skill all in its own. Programming the Yamaha synth chips to produce pleasing sounds was another, difficult step beyond just composing and performing the music. With the rise of consumer-level MIDI hardware, composers could simply play their songs and then send the MIDI sequence off to be reproduced by the end-user's hardware.
This video compares DOOM's most iconic music track played through several contemporary sound devices.


There's a caveat to that, though, and it's that you ultimately had no idea what it would sound like. Because MIDI (mostly) only contains the sequence of notes and the numerical instrument types to use, it's up to the playback device to provide the actual sounds. Due to its ease of use for composers, MIDI was growing in popularity among game music circa 1990, but most computers still didn't have a device capable of performing proper wavetable synthesis.


The solution? "Fake" it, using the on-board Yamaha synthesizer that almost every sound card DID have. Unfortunately, this was far from an optimal solution. It worked by using a software driver to convert the MIDI instructions into FM synth sounds, but what this ultimately meant is that any given song would only use a half-dozen or so of the millions of possible sounds that an FM synth chip could produce.
This circumstance is the reason why a lot of people look down on the game music of early PC games. Where the composers were working with expensive Roland hardware and producing fairly natural-sounding music, most of the consumers experiencing their works were hearing a farty, buzzy interpretation of it that bore little resemblance to the intended sound.


Super mega-hit Doom is one of many games that fell victim to this fault. Doom's music was composed by Robert Prince in MIDI format and intended to be played back on a Roland Sound Canvas SC-55. That's an expensive piece of external hardware that performs MIDI playback at a very high quality for the time, and few PC gamers had such a luxury.


The game supported the Gravis Ultrasound, too, and surely that was more common, but the overwhelming majority of players who enjoyed Doom on DOS will remember the soundtrack quite differently. If you had a Sound Blaster or one of its many clones, you heard classic Bobby Prince tracks like "At Doom's Gate" through your PC's OPL2 chip, or if you had a Sound Blaster 16, its OPL3.


All of this is ancient history, so why are we reporting on it now? Well, because a mad lad who goes by "retroVGM" on YouTube has taken it upon himself to create a native OPL3 version of the Doom soundtrack that makes full use of all the under-appreciated capabilities of the YMF238 synthesizer. Check it out in the video above.


It's an incredibly interesting project from a certain perspective. Doom's soundtrack, as we mentioned above, was created using MIDI for the Roland SC-55, so this can't be said to be the "original intention" or anything like that. A lot of people have nostalgic memories of the sound of Doom on the AdLib-style FM synths, though, and this is sort-of like a super-charged version of that. It sounds amazing if you have a taste for FM synth sounds. 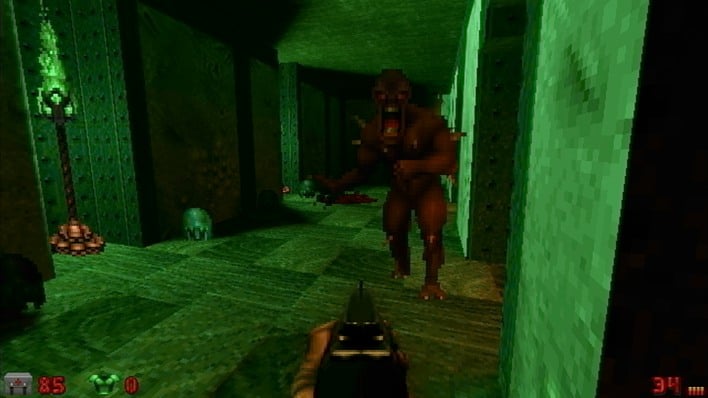 If you dig the sound, as this writer does, the creator has graciously provided a download with audio files in OGG Vorbis format that seamlessly loop so that they can be used with Doom source ports like GZDoom or the recently-released prboom-plus-rt with ray-traced lighting. The combination of ray-traced graphics with exaggerated bloom, a CRT blur effect, and what-could-have-been OPL3 music produces an alternate-timeline-Doom experience that must be played to be believed.