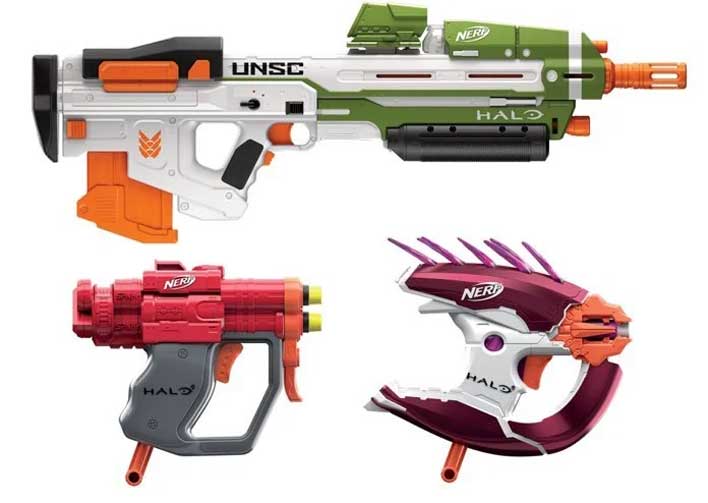 Fans of the Halo video game franchise will appreciate what Hasbro has cooked up under a new partnership with 343 Industries. The partnership will see a new range of Nerf blasters that look like weapons used in the widely popular Halo franchise, and the upcoming game Halo Infinite expected the land this year for Xbox Series X, Xbox One, and PC. Little is known about the new game at this time, so weapons inspired by those used in the game are news for fans of the franchise.

One of the Nerf blasters is the Nerf Halo MA40 Blaster, which was designed to capture the look of a weapon used in Halo Infinite. Another of the weapons is the Halo SPNKr MicroShot that appears to have the ability to shoot one dart.

The Halo Needler MicroShot has space for a single dart. Both MicroShot weapons appear to be spring-loaded with an orange stick under the grip that would be pulled to load the weapons. The MA40, on the other hand, is a motorized, semiautomatic blaster with a 10-dart magazine that includes 10 Elite darts.

Fans of the weapons will have to wait a long time before they can pick them up; the Halo Nerf blasters will land at major retailers starting on October 1. The MA40 will include a game card that allows users to unlock the blaster's color scheme in the Halo game. The motorized blaster operates on four C batteries that aren't included, and it ships with a rail riser.

The rail riser allows users to attach Nerf accessories and customize the blaster. The MA40 blaster will sell for $49.99, and each of the smaller single shot blasters will sell for $9.99. This certainly isn't the first tie-up between Hasbro and its Nerf line of blasters and a video game. Hasbro tied up with Epic Games to create Fortnite Nerf blasters in 2018.