Halo Infinite players have been deeply disappointed by the lack of new game content. 343 Industries has thankfully released an update about what players can expect over the next few months. There is now finally a 2022 Halo Infinite roadmap and it appears that co-op will be available later this year.

The 2022 roadmap includes both definite dates and items as well as goals or targets. The roadmap primarily features items and events from the upcoming Season 2. Unfortunately co-op is one of the few items with a “target date.” 343 Industries hopes to release “Campaign Network Co-Op” in late August 2022.

Season 2: Lone Wolves begins on May 3rd and goes until November 7th. The season includes two new maps, Catalyst (Arena) and Breaker (BTB), and three new game modes dubbed “King of the Hill,” “Land Grab,” and “Last Spartan Standing.” There will be a new 100 tier battle pass that offers free armor codes and earnable credits. The “Interference” narrative event will take place between May 3rd and May 16th, while the “Alpha Pack” narrative event will occur between July 19th and August 1st. Fracture: Entrenched will happen during the end of May. 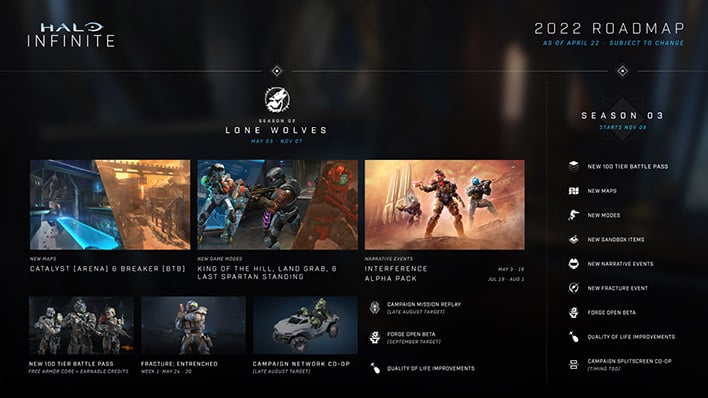 343 Industries has also promised that Campaign Mission replay should be available in late August and the Forge Open Beta will launch in September. According to the developers, “We’ve successfully had Forge in private flighting with a limited audience for some time, so we’ve decided to forgo a large-scale formal flighting program and go right to open beta.” Their hope is to be able to get Forge tools out to players more quickly.

The roadmap also contains a few hints on what players can expect in Season 3. Season 3 should feature a new battle pass, maps, modes, sandbox items, narrative events, and fracture events. The Forge Open Beta will continue to be available and Campaign Split-Screen Co-Op will officially launch. There are no official release dates or other available information with the exception of its launch date of November 3rd.

Halo Infinite players have been very vocal about their displeasure and 343 Industries have acknowledged these frustrations. Developer Brian Jarrard recently remarked, “We're certainly not happy to be unable to meet player and community expectations, it's a difficult situation that's going to take the team time to work through.” The latest update assured players that 343 Industries is “fully committed to making Halo Infinite the best Halo experience ever.” It argued that any delays are so that the developers can deliver a better player experience with good quality of life changes and prioritize “team health and getting ourselves into a sustainable development rhythm.”