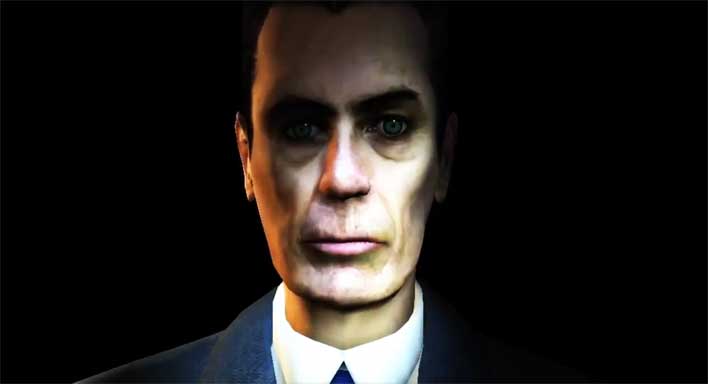 Everyone who was into PC gaming back in the late 90s played Half-Life; it was such a revolutionary game that it still has fans today. Fans of the franchise have been clamoring for Valve to make Half-Life 3, but that has yet to happen. What Valve is doing is creating a VR game based on the franchise called Half-Life: Alyx. It's not the Half-Life we wanted, but it's the Half-Life that we are getting.

Yesterday as the decade came to a close, we heard from an iconic character in the franchise who has remained silent for 12 years. These latest words from the G-Man come with the assumption that he will appear in Half-Life: Alyx.

The video message from G-Man can be seen in the tweet from voice actor Mike Shapiro who has played G-Man in the franchise. The creepy character starts by saying, "Should old acquaintance be forgotten?" The character then states that after so much time, some things are difficult to remember. The message winds up with an ominous "see you in the new year... and do prepare for consequences."

Difficult to remember is true for fans after all this time. Valve's David Speyrer has suggested that before jumping into Half-Life: Alyx, players should play Half-Life 2: Episode 2. Alyx isn't a short game; it's about as long as Half-Life 2, according to Valve. The game is compatible with most PC VR headsets. Gamers gearing up for the release of the game have purchased so many headsets that the Oculus Quest VR is backordered through late February.