Grand Theft Auto V is still going strong nearly eight years after it first debuted on the PlayStation 3 and Xbox 360 (remember those?), followed by a slightly newer re-release on Windows PCs and the the PS4 and Xbox One. To date, publisher Take-Two Interactive has sold over 150 million copies of GTA V on various platforms.
The publisher revealed the impressive sales stat as part of its earnings report for its fiscal first quarter of 2022. Looking at the data from the previous quarter, it means T2 sold an additional 5 million copies in the past three months. Not too shabby, given that GTA V is far from a new game at this point. That is not the end of it, either.
T2 plans to launch an "expanded and enhanced version" for the latest generation game consoles, those being the PlayStation 5 and Xbox Series X/S, on November 11, 2021. Developer Rockstar Games had previously said the updated version will bring "new features and more" to the table, but the details are still largely a mystery.
"The new generation versions of GTAV will feature a range of technical improvements, visual upgrades and performance enhancements to take full advantage of the latest hardware, making the game more beautiful and more responsive than ever," Rockstar Games said last year.
We presume the retooled version of GTA V will tap into the fast storage capabilities of modern consoles, to drastically reduce game load times. It will also leverage the newer hardware in the latest gen consoles, namely the custom SoC based on AMD's Zen 2 CPU cores and RDNA 2 graphics. 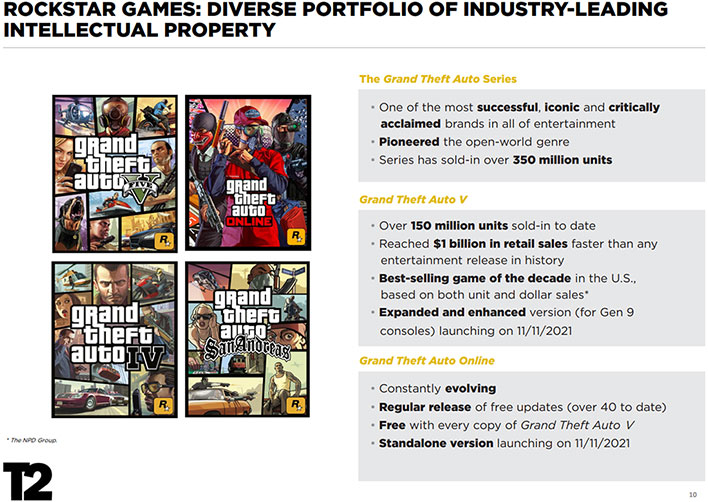 Even without another re-release, GTA V has performed exceptionally well for T2. The publisher says the game reached $1 billion in retail sales faster than any entertainment release in history, and is the best-selling game of the decade in the US, both in terms of units sold and how much revenue it has generated.
The updated sales data comes as rumors for a new installment heat up. Grand Theft Auto 6 could see a return to Vice City, with potentially more locations added to the map. Nothing official has been announced, but according to multiple leakers, GTA 6 might not come out until 2024 or even 2025. The reasoning, as the story goes, is that T2 wants a bigger install-base of PS5 and Xbox Series X owners before it splashes another GTA game onto the scene, which makes sense.
In the meantime, T2 has a cash cow in GTA V, and continues to massage GTA Online (with a standalone version of GTA Online coming out on November 11 as well).