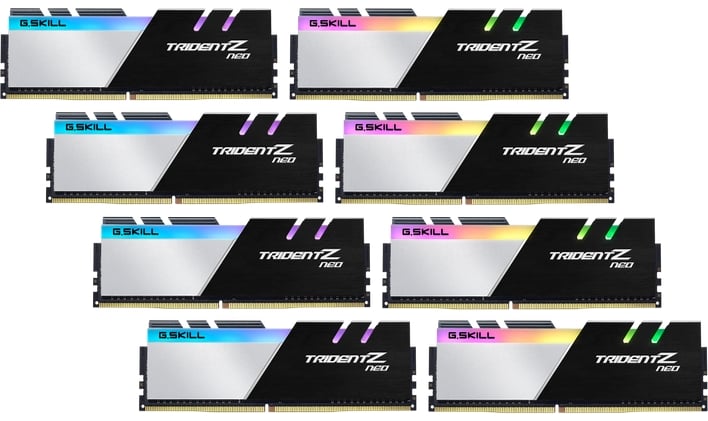 Last week, AMD officially launched its Ryzen Threadripper 3990X processors, which rocks 64 cores and a staggering 128 threads. Needless to say, the Threadripper 3990X is a benchmark monster and is especially adept at handling multi-threaded workloads. We've even seen it break some world performance records when overclocked to 5.5GHz.

G.Skill is embracing the Threadripper 3990X with the launch of a new DDR4 kit specifically optimized for AMD's flagship workstation processors. The new Trident Z Neo kit is rated at DDR4-3600 speeds and features timings of CL16-20-20. The modules operate at 1.35V and are assembled with high-density 16Gb chips.

This particular kit features a capacity of 256GB, which is comprised of eight 32GB modules. According to G.Skill, it validated its modules using an ASUS ROG Zenith II Extreme Alpha motherboard, which is about as premium as you can get when it comes to TRX40 Threadripper 3000 motherboards. The motherboard comes packed with 8 DIMM slots, support for five M.2 SSDs, PCIe 4.0, Wi-Fi 6, 10Gbps Ethernet and Aura Sync RGB lighting among other things.

"This new DDR4 memory specification offers a perfect choice for those pursuing ultimate memory performance or attempting to build a powerful workstation for heavy content creation workloads," writes G.Skill. According to the company, its new 256GB Trident Z Neo DDR4-3600 kit will be available during the second quarter for an undisclosed price.