AMD is claiming multi-core superiority in the high-end desktop (HEDT) space with its newly minted Ryzen Threadripper 3990X, a monster of a CPU with 64 cores and 128 threads clocked at 2.9GHz to 4.3GHz. What's the fun in sticking with stock settings, though? Overclockers have begun experimenting with the new chip, and there is a game of leapfrog taking place. In addition, some benchmark records are being set.
First, let's talk clockspeed. For a short while, an overclocker who goes by "TSAIK" set the CPU frequency on the Threadripper 3990X by cranking it to 5,548.7MHz (55.5x multiplier), with an MSI Creator TRX40 motherboard. It would not last long, however, because an overclocker who goes by "SAFEDISK" now holds the top spot. 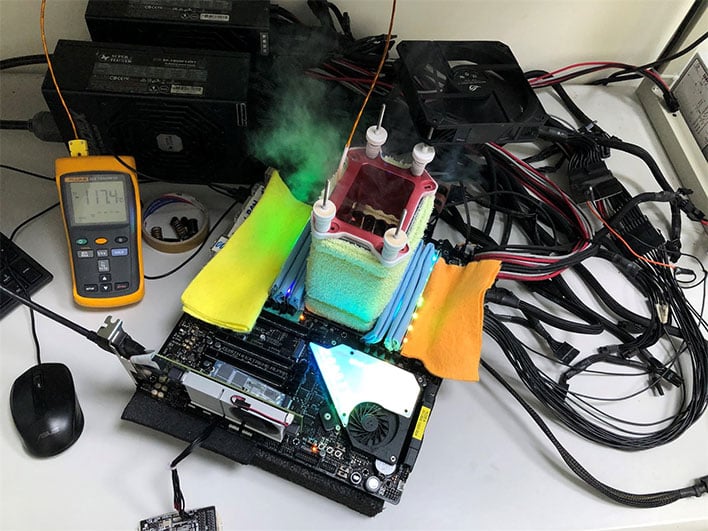 SAFEDISK skipped ahead of TSAIK to claim the top rank by pushing his Threadripper 3990X to 5,573.7MHz (55.75x multiplier). This was achieved using an ASUS Zenith II Extreme Alpha motherboard, and of course a steady supply of liquid nitrogen (LN2) to keep those toasty temps from ruining the overclocking party.
We don't expect this record to stand, but as of this writing, it ranks as the top overclock on a Threadripper 3990X as recognized by HWBot.

While SAFEDISK can claim the top overclock (for the moment), a user who goes by SPLAVE is keeping himself busy by setting benchmark records with the Threadripper 3990X. One of the more interesting ones is Cinebench R20. Have a look... 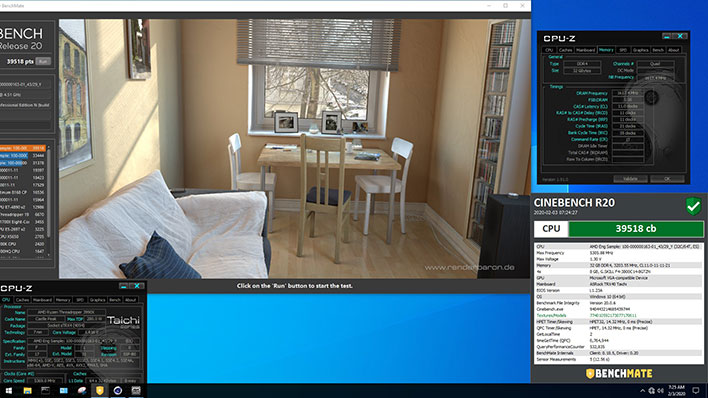 SPLAVE currently holds the top Cinbench R20 score at 39,518. He achieved it after pushing his Threadripper 3990X to 5,305.9MHz, which incidentally is not the highest frequency he was able to hit with his 64-core/128-thread CPU.
Out of the records he now claims, his highest overclock is 5,475.4MHz, which is attached to a GPUPI for CPU - 1B score of 21 seconds and 622ms. Sandwiched in between is an overclock to 5,375MHz, which he used to set a Geekbench 3 record of 293,771 points. SPLAVE's motherboard of choice for these benchmark runs is an ASRock TRX40 Taichi.
Of course, LN2 cooling is not practical for everyday use—it's really only useful for chasing benchmarking and overclocking records. To put the results into perspective, when Marco evaluated the Threadripper 3990X for us, he achieved a stable 3.95GHz (39.5x multiplier) overclock on air. He was able to boot into Windows at 4.1GHz across all 64 cores, but couldn't reliably repeat any benchmarks at that setting (he also experienced a couple of shutdowns with the CPU exceeding 100C at 4.1GHz).
At 3.95GHz, he recorded a Cinebench R20 score of 30,013, up from 24,579 at stock settings. Good stuff for sure, just not on the level of what the Threadripper 3990X can achieve when taking a bath in LN2.