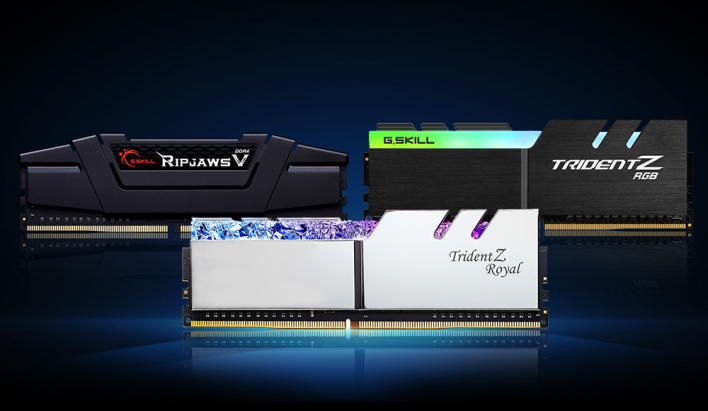 PCs need faster RAM to keep up with the leaps in processing power, and as such, G.SKILL is releasing a new lineup of RAM. The new, low-latency Samsung B-die DDR4 RAM clocking in at 4000MHz comes in Ripjaws V, Trident Z RGB, and Trident Z Royal variants to provide performance and style in computers.

According to G.SKILL, the DDR4-4000 CL16-19-19-39 memory is “an ideal performance upgrade for PC builds intended for gaming and content creation.” It has been optimized for the 10th generation Intel processor lineup on the Intel Z490 Chipset, but it can be used on other platforms with varying degrees of success. In their provided screenshots, G.SKILL tested the RAM with “ASUS ROG MAXIMUS XII EXTREME, MSI MPG Z490 GAMING PLUS, and ASRock Z490 AQUA motherboards with the Intel® Core™ i9-10900K, i7-10700K, and i5-10600K processors.”

While G.SKILL only rates these kits for Intel 10th generation processors, perhaps we could see AMD Zen 3 parts make the qualified vendors list (QVL) once they debut on October 8th. In any case, the new DDR4-4000 CL16-19-19-39 memory will come in two kit sizes, 32GB and 16GB. G.SKILL claims the 16GB kit is “an ideal choice for overclockers and enthusiasts who are aiming for a higher benchmark score or a more efficient memory kit.”

As for cost, the 16GB kit will be priced reasonably across the board, ranging from $120 to $170. The 32GB kit, on the other hand, will set you back a little more, ranging from $239 to $335. These prices are based on Newegg at the time of writing, so your pricing mileage may vary based on sales and other e-tailers. If you want to pick a kit up, they are available at G.SKILL retailers starting now.