Epic Games appears to have jumped the gun and revealed the "mystery game" that is set to unlock as a free offering in the Epic Games Store today. In a now-deleted Twitter post, the official Epic Games Store account let the cat out of the bag, saying Grand Theft Auto V will ride into town, and that once you claim it, the game is "yours to keep forever."
Free games on a weekly basis is one of major incentives Epic Games came up with to entice players (and by extension, developers as well) over to its digital distribution platform. Not without controversy, Epic Games also inks exclusive deals, whereby some titles are only available on the Epic Games Store for a period of time before heading over to Steam.
As far as the former goes, GTA V is a pretty big draw still today, five years after it was initially released to PC. It follows Death Coming, a fun and addictive little title that is still free at the time of this writing, until 11:00am ET (8:00am PT).

Tweet ad is deleted, so here you go pic.twitter.com/3oja0C3418

While Epic Games saw fit to delete its Twitter post revealing GTA V as the next free title, it was captured and archived by Wario64. "Get Grand Theft Auto V free on PC until May 21. Yours to keep forever on the Epic Games Store," the tweet read, accompanied by a video reveal. 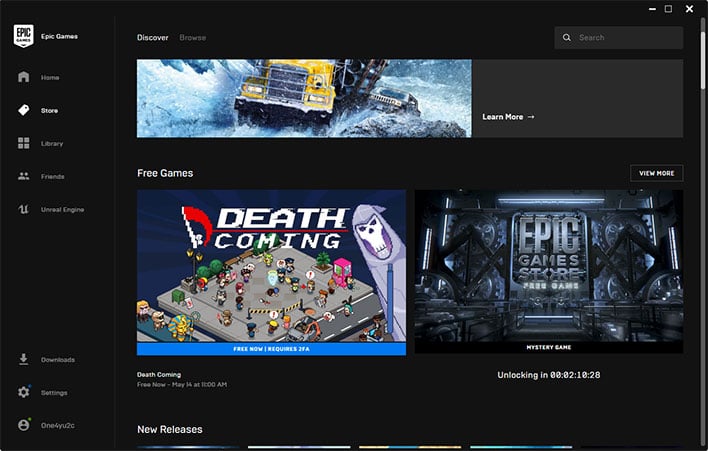 Grand Theft Auto V (the "mystery game") unlocks as a free title at 11:00am ET today at the Epic Games Store

According to the countdown timer for a mystery game at the Epic Games Store, GTA V will unlock at 11:00am ET (8:00am PT), the same time Death Coming ceases to be free (or by the time your read this). If you've held off playing all this time, today is your chance to reward your patience.
Some things have changed since we reviewed GTA V. One of the big draws these days is Grand Theft Auto Online, a free online multiplayer extension. In addition to being able to team up on missions, there are role playing servers that add a deeper element, for those who are interested in that sort of thing.
Once the time arrives, head over to the Epic Games Store to claim GTA V.