Google yesterday made a surprise announcement of its upcoming Pixel 6 and Pixel 6 Pro smartphones. In a market where most smartphones are all starting to look alike, Google's new Pixel 6 family charts a different design course -- at least from the back -- with its wide camera pod and two-tone finishes.

However, that fresh design and the advanced hardware lurking underneath won't come cheap. On two separate occasions, Google confirmed that the Pixel 6 smartphones would carry premium pricing, making them far more expensive than the Pixel 5 and Pixel 4a 5G. "We've definitively not been in the flagship tier for the past couple years, this will be different," said Google hardware chief Rick Osterloh in an interview with The Verge. He added that "it will certainly be a premium-priced product."

The publication took those comments to mean that we'll be looking at prices above $1,000. The $1,000 price point is more common these days for flagship smartphones, and companies like Apple and Samsung have devices that far surpass that mark. For example, the iPhone 12 Pro starts at $999, with the iPhone 12 Pro Max starting at $1,099. Likewise, the Galaxy S21+ and Galaxy S21 Ultra begin at $1,049 and $1,249, respectively. 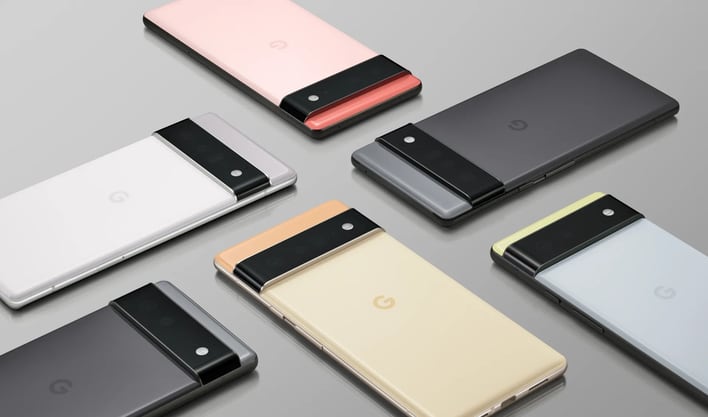 Osterloh made similar comments to the German language Der Spiegel news outlet regarding Pixel 6 pricing and positioning. "We weren't represented in the smartphone flagship segment for the past two years - and not really before that either. But the Pixel 6 Pro, which will be expensive, was designed specifically for users who want the latest technology," Osterloh explained. "But the Pixel 6 also belongs in the upper segment and can keep up with competing products. I would call it a 'mainstream premium product.'"

That premium pricing gets you up to a 6.7-inch 120Hz QHD+ display, Google's custom Tensor SoC (which reportedly was co-developed with Samsung), an under-display fingerprint reader, and all-new camera sensors. Google has been using the same camera sensor from the Pixel 2 as its primary camera, so we're eager to see how this new system will compare to its rivals. In addition, the flagship Pixel 6 Pro will come equipped with wide-angle, ultra-wide, and 4x telephoto cameras -- the Pixel 6 lacks the telephoto option.

We'll learn about just how expensive these phones will be closer to an expected Fall 2021 launch.