In November, Apple announced that it would reduce its App Store fees to 15 percent for the first $1 million in yearly revenue for developers following pressure from Epic Games. Like Apple before its policy change, Google took a 30 percent cut of digital goods sold through its app marketplace. Today, Google announced that it would take the same approach as Apple with lower fees in the Play Store.

Starting on July 1st, "99% of developers globally that sell digital goods and services with Play will see a 50% reduction in fees," said Sameer Samat, Google VP for Product Management. "These are funds that can help developers scale up at a critical phase of their growth by hiring more engineers, adding to their marketing staff, increasing server capacity, and more."

According to Google, this fee reduction to 15 percent is available to "every Play developer, regardless of size" on their first $1 million in annual revenue. "As a platform we do not succeed unless our partners succeed," Samat added. "We look forward to seeing more businesses scale to new heights on Android, and to further discussions with our developer community to find new ways to support them technically and economically as they build their businesses."

The fee reduction is big news for all developers because if you're an indie dev scraping by in your free time or a massive outfit like Electronic Arts, you'll still see at least some benefit. However, once you cross that $1 million threshold, you'll still be subject to the old 30 percent cut that Google has reserved for years on that additional revenue.

While this is good news for developers, Epic CEO Tim Sweeney is looking at the move with a skeptical eye, as witnessed by the tweets below. 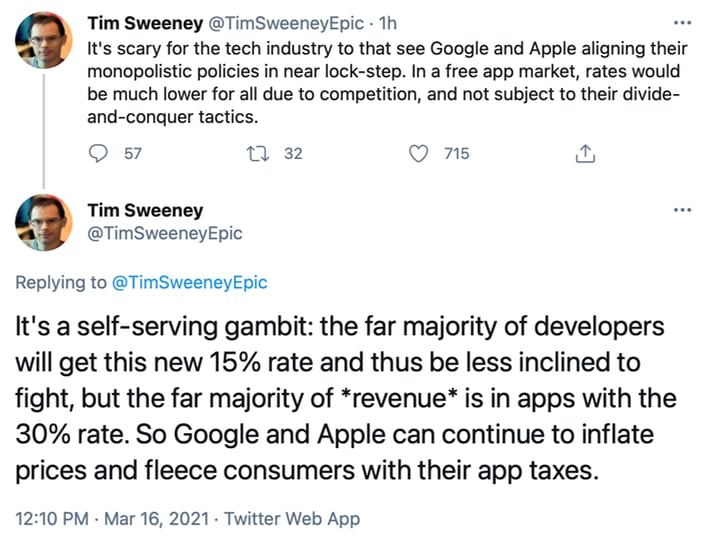 Regardless of Apple and Google's motives, we likely wouldn't be at this point if Sweeney hadn't decided to take on the two giants in such a public way last year. It remains to be seen if Epic Games will emerge victorious in its courtroom right with Apple -- which will take place this Spring -- but things at least appear to be moving in the right direction for developers that have lambasted the Apple and Google "app tax."