As owners of the Pixel 6 continue to battle issues with their smartphone, leaks are already emerging of what the Pixel 7 Pro may look like. The renders indicate the next Pixel may see some changes when it comes to its display.

Google's Pixel 6 and 6 Pro launched back in October of last year to both praise and frustration. While the 6 Pro seemed to escape most of the issues owners incurred, the smaller sibling had a host of issues that are still being resolved with software updates. But in true leaker fashion, there are already images of what the next generation Pixel Pro may look like. Renders courtesy of Steve Hemmerstoffer, aka OnLeaks, show a Pixel with a curved display and a single punch-hole selfie camera. 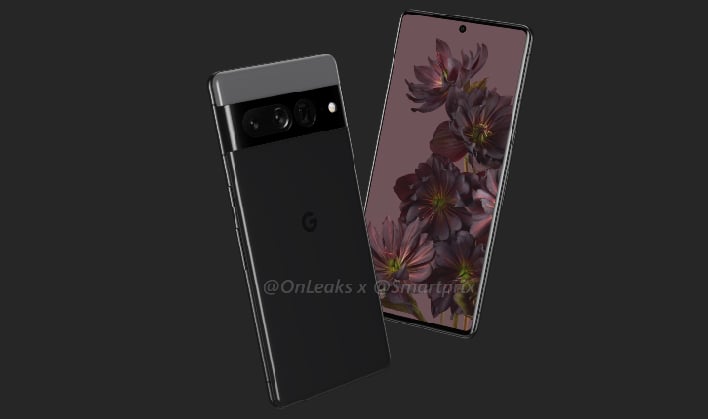 Images reveal a Pixel 7 Pro featuring a 6.7 to 6.8-inch curved display. It is believed to have a high refresh OLED panel that will compete with the likes of the Samsung Galaxy S22 Ultra. Along with the curved display, the images indicate that there will be a singe punch-hole for the front facing camera.

If you flip the smartphone over, the Pixel keeps its signature two-tone design. As for the notable bar housing the camera array that spans the width of the backside and protrudes out from the current Pixel 6 and 6 Pro, little has changed. It does appear that it may not stick out quite as much, but there is still a noticeable bump. 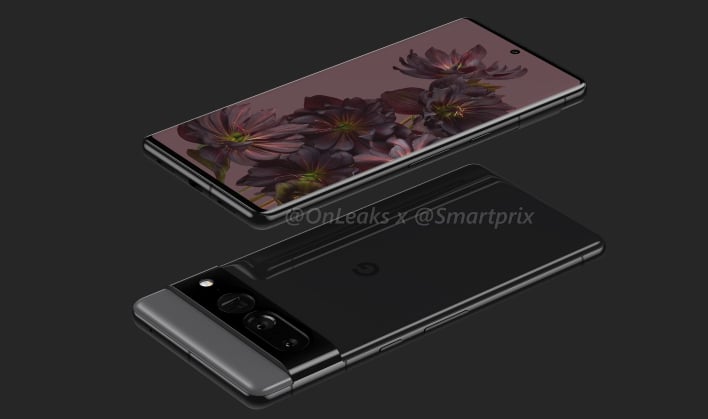 On the bottom of the phone there are dual stereo speakers and a USB Type-C charging port. The sim tray is housed on the left side of the phone, while the power and volume rockers are located on the right side. It also appears that antenna bands are on all four sides of the smartphone.

When it comes to the cameras housed in the bump on the backside, they will probably consist of a primary wide-angle camera, a periscope telephoto camera, and perhaps an ultra-wide camera. There are a couple of sensors accompanying the cameras, and a microphone module as well.

The device shown is slightly slimmer, at 8.7mm, than the S22 Ultra, which comes in at 8.9mm thick. This could be due to the difference in battery size. The dimensions of the smartphone are approximately 163x76.6x8.7mm.


It is worth noting that any leaks at this point are to be taken with the traditional grain of salt. The design could change several times between now and its official launch. However, it is interesting to see that Google may be moving away from the non-curved display, while keeping the bar type camera array on the backside of its flagship Pixel phone.