If you're like me, you probably keep your smartphone next to you most of the time, though perhaps not all of the time. And of course it never fails that when a smartphone is out of reach, that is when a call comes in, presenting you with a choice—get up and go see what monster is calling instead of texting (ugh), or ignore it and check it later. Now there's a third choice, courtesy of an update to Google's official Phone app.
Google's official Phone app comes standard on Pixel handsets, and last September, it was made available as a free download to Android devices in general, from the Play Store. It is a fairly basic dialer for Android handsets, though it does offer a few nice amenities, like Hold for Me—if you get put on hold, Google Assistant can wait on the line and let you know when you're no longer on hold.
Adding to the growing list of capabilities is a basic (albeit welcome) Caller ID feature that will announce a caller's name and phone number when there is an incoming call. You probably already have this on whatever dialer your OEM has installed on your Android device, and now you can use it with Google's official Phone app too, if you prefer. 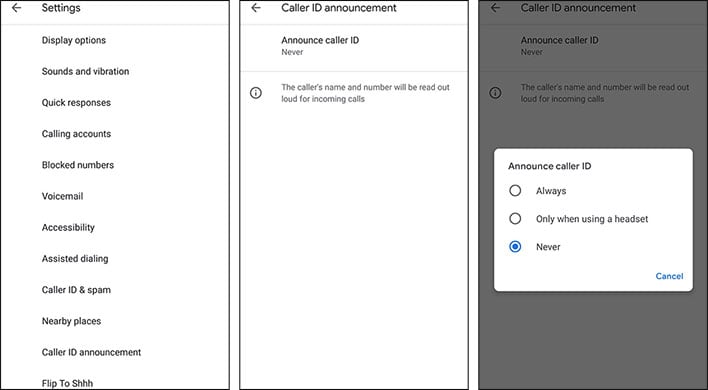 The 'Caller ID announcement' feature is not turned on by default, though. To enable it, head to Google Phone > Settings > Caller ID announcement, then tap on Caller ID announcement and change it from Never to either Always or Only when using a headset, depending on your preference.
Obviously this is not a groundbreaking feature that is going to change the world. However, it's nice to see Google finally make it available in the stable version of its Phone app (note that the setting was previously hidden in the Advanced section in the beta build). It can come in handy when setting your phone down on a charger or plopping it somewhere out of reach to serve as a jukebox, and can be a boon for any Android user with a visual impairment. So kudos to Google for adding this feature to the final build.

If you want to use it, you can download Phone by Google from the Play Store.