If you're using Google's official phone calling app -- and that probably means most of you Android users out there -- there's a rather alarming and potentially dangerous bug that users are reporting. The Phone app is an essential piece of software on your Android smartphone, as it handles incoming/outgoing calls, gives you access to visual voicemail, and handles spam filtering (among other things).

But happens when the Phone app can't even handle one of its most basic functions like answering calls? That's what is happening to several Android users that raced to the app's Google Play page to raise their concerns. The main problem seems to be that users can't answer any call no matter how hard they try.

"As well at getting a ring without being able to see or answer any call, the phone numbers are linking with my contacting info for incoming calls," writes Jess Harland-Kenny. "I can't answer a call by swiping up, and sometimes not even by pressing 'answer' in the notification. Swiping up or even tapping on the 'Answer' button doesn't work."

One user, Neha Farid, remarked, "Whenever the call comes, the screen becomes blank, and call cannot be answered." It's a similar situation for others, with Adriel Roman adding, "Not sure if it's the app or my Pixel 4 which came with app as default, but recent calls are not displaying. I will receive a call or miss one and it won't show on [the] recent call list. I tried deleting the calls and they don't delete."

"After the latest update on 3/17/2021, I can hear a call ring, however the phone call screen is not displayed. Clearing cash and storage and restarting didn't help," added Sonya on the Google Phone app listing. "One of primary features of the phone app is to handle incoming calls correctly, that includes ringing and displaying the call so user can respond." 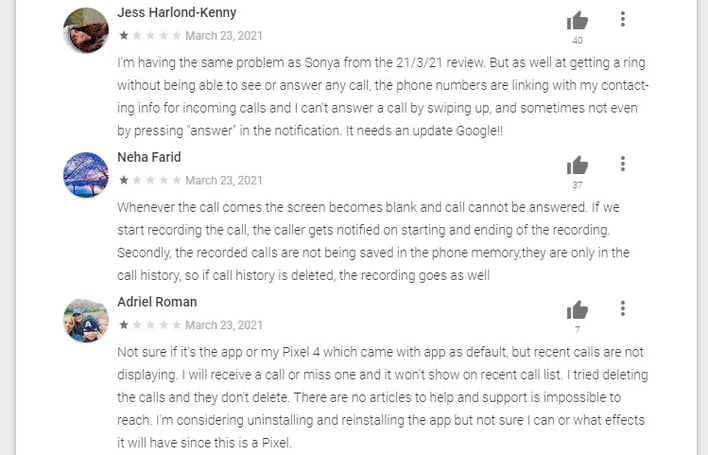 We don't know how widespread this problem is and if it’s relegated to Wi-Fi calling in conjunction with Google Fi, or if there is some underlying Wi-Fi calling issue with the Phone dialer app. However, complaints filtering up to the top of the "Most Relevant" reviews for the Google Phone app and are being frequently uprated seems to suggest that something is amiss.