Google Fixes One Big Annoyance Of Texting Between iPhones And Android

A text message exchange between an Android and iPhone user can be a bit irritating. Not only do users have to stare at different-colored messages, but Android users receive long messages if someone who uses iMessages “reacts” to their text. Google is finally getting rid of at least one of these annoyances by improving the ways in which iMessage reactions appear on Android devices.

If an iMessage user currently reacts to an Android user’s message, the Android user will receive a long message back. The long message will say something like “Laughed at” and then the message the Android user had previously sent. This quirk can be exasperating to say the least, and can especially snowball in group chats when multiple people react to messages.

Google has now created its own emojis that will correspond on Android to iMessage reactions, also known as “tapbacks.” These reactions do not match one-to-one, but they get the general gist of the reaction across. The reactions will appear in the right-hand bottom corner of the message. They are as follows: 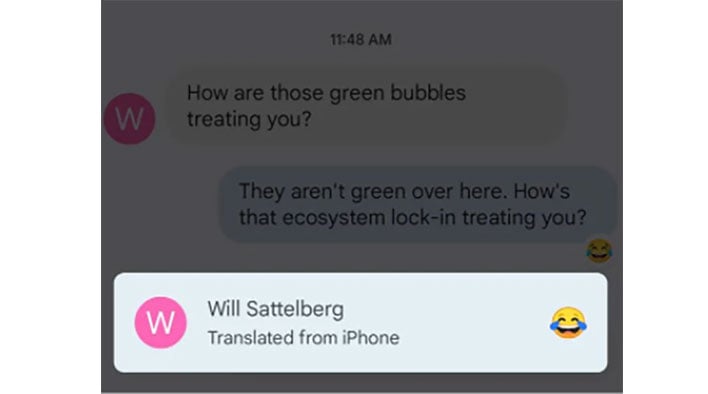 Sample of the new "tapback" reactions from Android Police

It is important to note that the reactions will not work on photos. If an iMessage user reacts to a photo, you will still receive the old message. Android users can also not yet react to iMessage texts. You will still need to respond to your iPhone friends in the good ol’ fashioned way.