Last year, Google updated its smart displays with several new features that made them even more helpful. Now the company has unveiled the second generation of its Nest Hub, which is available for preorder and will release to the world on March 30th.


The first major feature of the new Nest Hub is geared towards helping people get a better night’s sleep. With last year's software update, Google introduced a “Sunrise Alarm” that gradually increased the display’s brightness to wake the owner along with some relaxation modes for the evening. Now, Google has implemented sleep sensing technology using Soli low-energy radar to analyze how the person nearest the Hub is sleeping. It can detect motion, breathing patterns, and sleep disturbances, all without using a camera or wearable. Then when a user wakes up, they can obtain a report which will help them sleep better. Google created a short video to explain how this works below:
Aside from the sleep feature, Google has included a new speaker design that boasts 50% more bass than the original. Google claims it can “Fill any room with music, podcasts or audiobooks from services like YouTube Music, Spotify, Apple Music and Pandora — or enjoy your favorite TV shows and movies with a subscription from providers like Netflix, Disney+ and YouTube TV.” Furthermore, with quick gestures, you can pause or play content hands-free by simply tapping the air in front of the display. 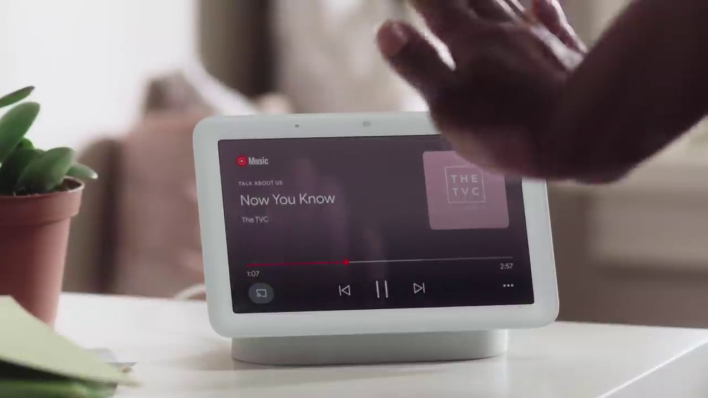 Inside the device is a new dedicated onboard machine learning SoC that allows data processing to happen directly on the device rather than being first sent to Google data centers. This appears to be part of a larger push for privacy from Google, which is a noble effort.

Overall, the new Nest Hub has all the same great features as its predecessor along with some new ones that aim to improve users’ daily lives. If you want to grab one today, it is available on the Google Store for $99.99 and will hit shelves later this month.