Digital assistants are designed to make our lives easier and fit naturally into our lives. Whether it's the Google Assistant, Amazon Alexa, or Apple Siri, voice commands are just a keyword away. However, some voice prompts like "Hey Google, stop the alarm" may be getting easier if some secret sauce codenamed "Guacamole" becomes official.

Google accidentally uncovered its Guacamole options in a recent beta of the Google app running on certain Android 11 devices like Google's Pixel 5. The description of the options says "Quickly get things done with Guacamole." Google's developers aren't talking about pita chips and blended avocado, which is a delicious snack. Rather, the Guacamole options contain a single toggle to allow skipping the "Hey Google" keyword when performing certain tasks. Google has not officially announced these features, as they've only been in development for a few weeks and are still likely the subject of debugging and testing.

Thanks to some sleuthing by 9to5 Google, it seems that certain tasks where a device is interrupting the user's day--say, when the phone rings or an alarm is presently going off--the Google app will listen for voices and act upon them without the voice prompt. Simply saying, "Answer (or decline) the call," or "Stop the alarm," was sufficient to process the request. 9to5 Google says it has deconstructed the Android Package Kit (APK file), which can be done with a decompression utility and a Java Archive (JAR) reader or a dedicated Android decompiler tool. Their efforts resulted in finding several lines of code hinting at this functionality. 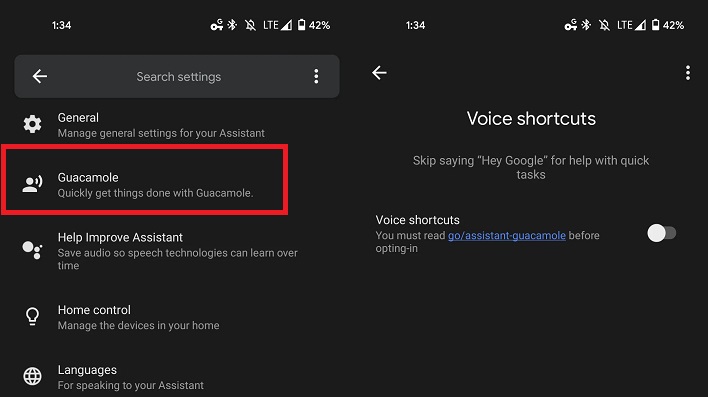 Privacy advocates and Apple's advertising teams can probably put the torches and pitchforks away. The Google Assistant is always listening for its key phrase before springing into action, just like Microsoft's Cortana or Apple's Siri. In that context, it doesn't seem like this would add any additional surveillance or intrude into anybody's personal conversations more than any digital assistant already does. We'd still be careful what we say around Guacamole-enabled devices, as it might construe something you say to someone else as a command. "I'm not going to answer the call" might result in answering the call, especially in beta form.

Unfortunately, it seems that not every phone can access these options just yet. We enrolled in the Google app beta on our Galaxy S20 Fan Edition running Android 11 and got the latest beta dated April 23. The options are not available on this device, but have been documented (above) by 9to5 Google. Not all of Google's beta features make it into public, but this seems like a useful addition. As for what this feature will ultimately add to the Google Assistant experience, we'll just have to wait for a public announcement.