Many people today rely on features like smart assistants to help better organize their lives. Rumor has it that Google Assistant will soon become even more useful and convenient. Google is reportedly testing a new feature called Google Assistant “Memory” that would allow users to save both real world and virtual content.

Google Assistant Memory is purportedly only available at the moment to Google employees for testing. However, 9to5Google was able to examine the files for an app that was recently uploaded to Google Play. They have done their best to piece together what they have discovered and so far the possibilities of Memory seem pretty interesting. 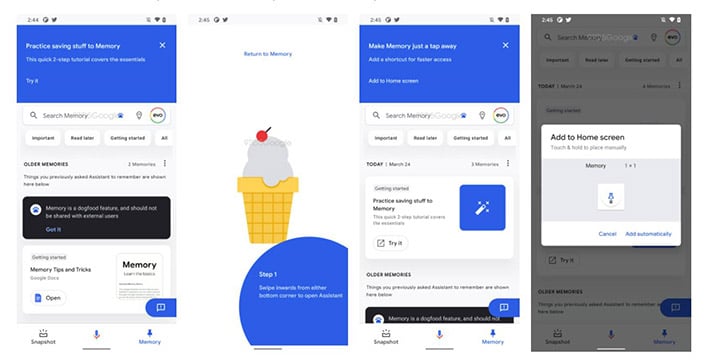 Memory will be a “easy, quick way to save and find everything in one place.” Users will be able to save any content on their screen, pictures of “irl” items like handwritten notes, and thoughts and ideas. This will include any Google Assistant Reminders. Memory will even save the “surrounding context” of these items like location, screenshots, and URLs.

These items can be stored by verbally asking Google Assistant to do so or through a home screen shortcut. These items can then be found in the Memory feed and will be organized by newest to oldest items. This particular feed will be found next to the existing Google Assistant Snapshot feature. Items that were saved that same day will be found under “Today” while anything else will be categorized under “Older Memories.” Google will also display information and tips that are useful to the Memory such as the ability to search for the status of one’s upcoming flight. 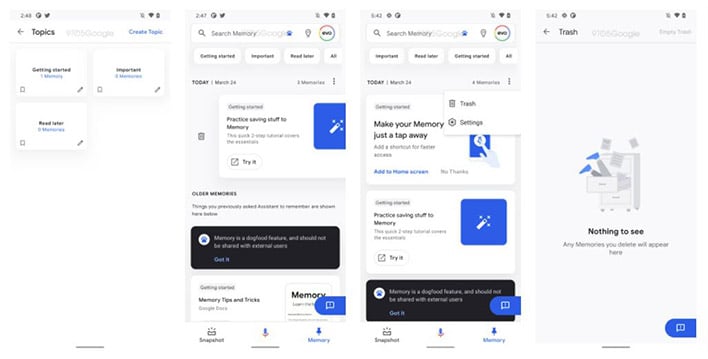 There will also be various ways to organize items in Memory. Google files such as Google Docs will be placed into their own category. Users will also be able to tag Memories as “Important”, “Save Later”, or however else they desire. These can then be shared with others or deleted permanently.

This tool so far sounds incredibly useful. Google has added several updates to their Google Assistant Snapshot feature over the last few years, but this appears to be the next step in its evolution. The ability to organize both real-life and digital content is a particularly nice touch. Unfortunately, it is currently unclear whether Google Assistant Memory will ever see the light of day. Fingers-crossed that testing goes well and that this feature will be soon be available to the public.