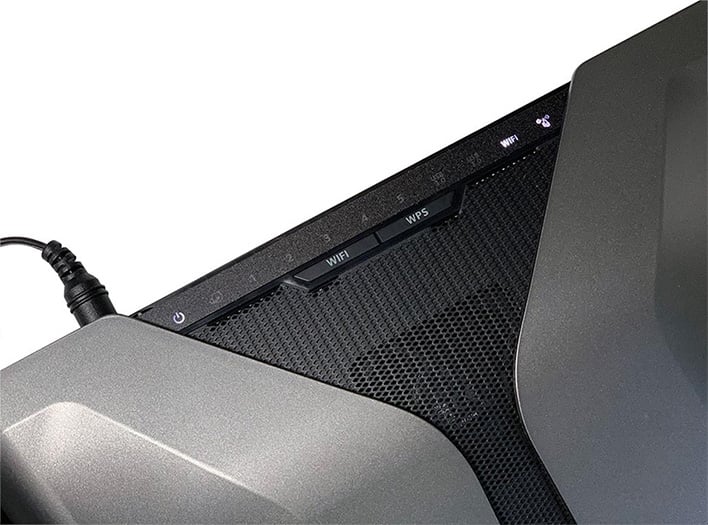 You might have really fast Internet service, but if your wireless router stinks, you will still be hampered by subpar performance, at least for your wireless devices. Unfortunately for Google Fiber subscribers, using their own Wi-Fi router was not an option...until now. So, if you are a Google Fiber customer and want better wireless range than what the provided box offers, you can now have it.
Not that Google's own equipment stinks. Still, for Google Fiber customers who are stuck with the company's older "Google Fiber Network Box," they may find that their wireless signals are not all that great in certain spots. Likewise, they are unable to take advantage of the benefits of the more recent Wi-Fi 6 (802.11ax) standard.
This is where a high powered router comes into play. Models like Netgear's Nighthawk AX8 (shown above) and the ASUS ROG Rapture GT-AX11000, both of which we have reviewed, offer excellent range and features, along with Wi-Fi 6 support.
"At Google Fiber, we want internet that just works for you anywhere in the home, and for most people that means Wi-Fi. So we’ve been working on improving your Wi-Fi experience, starting with giving you the opportunity to use whatever router you want. Now, you can bring your favorite router with you when you sign up for 1 Gig or change your plan to 'Use your own router' in your Google Fiber account," Google announced a blog post.
Bringing your own router to the Google Fiber party is not a requirement, just an option, and a nice one at that. If you plan to do that, however, you will need one that meets the following specifications...
"Connecting your own router requires advanced networking experience. If you don't consider yourself an advanced user, we don't recommend choosing this configuration," Google says.
In reality, it is not all that difficult to connect and configure your own router. We would argue that it does not actually require "advanced networking experience," though it certainly helps to be at least somewhat familiar with networking.
The timing of this announcement comes less than two weeks after Google introduced a new 2Gbps plan for $100 per month. Customers who opt for the faster speed tier will receive a Wi-Fi 6 router and mesh extender. At present, Google is looking for people in Nashville and Huntsville to test the service next month, and intends to roll it out to other Google Fiber cities this fall.