It’s been a while since we’ve talked about Google Fiber, after Google scaled back its ambitious plans of spreading 1Gbps internet to millions of Americans. However, Google Fiber is back in the news again this week and this time it’s not because it’s pulling out of an existing market or canceling previously-announced Google Fiber Cities — instead, Google is announcing that a big speed increase to 2Gbps is coming.

Although Google Fiber was among the first to offer 1Gbps fiber service in the United States, many other ISPs including AT&T and Comcast have countered with similar (or faster speeds). In order to make its service more attractive, Google Fiber will soon be testing the new 2Gbps internet plan stating this fall.

This move comes 10 years after Google Fiber first wowed Americans with its 1Gbps symmetrical download/upload speeds. Google says that back in 2010, the average internet speeds for residential customers was a pokey 7.12Mbps down and 2.42Mbps up. And since that initial debut, Google Fiber (and by extension, its Google Fiber Webpass wireless internet service) is available in 19 markets across the United States. 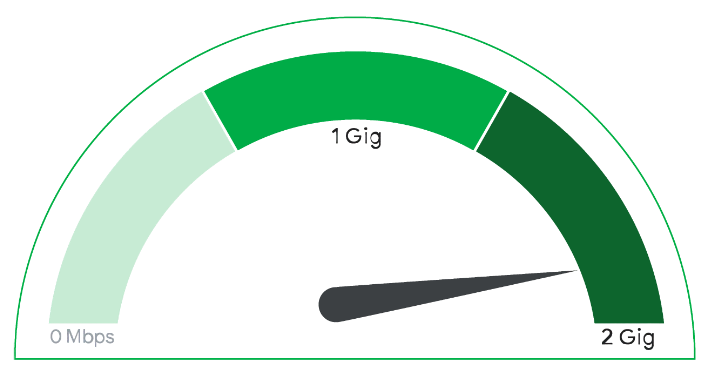 According to Google, customers who take advantage of this new plan won’t have symmetrical speeds; instead they’ll get 2Gbps down and 1Gbps up, which is still nothing to scoff at. And best of all, customers won’t pay a hefty premium over their existing service. Google Fiber’s current 1Gbps/1Gbps plan costs $70/month, while the new 2Gbps/1Gbps plan will cost $100/month. Customers will also be provided with a new Wi-Fi 6 router and a mesh extender to take full advantage of these speeds in their household (or business).

The first 2Gbps trials will begin in October in two existing Google Fiber cities: Nashville, Tennessee and Huntsville, Alabama. If you’re a customer in either of these two markets, you can ask to join the Google Fiber Trusted Tester Program to access the 2Gbps speeds. Following those initial trials, 2Gbps internet speeds will be available to all customers in Nashville and Huntsville before the close of 2020.

As for 17 remaining American markets, 2Gbps internet speeds will be available in “most” of these markets at the start of 2021.