Up until now, Google Fi customers who wanted to use a Samsung phone with the service had to purchase an unlocked model elsewhere. And that is certainly still an option. However, Google has now expanded the range of compatible Google Fi phones it sells to customers, to include half a dozen 5G Samsung Galaxy handsets.
They include the Galaxy Note 20 Ultra 5G as shown above, along with the Galaxy Note 20 5G, Galaxy S20 5G, Galaxy Note S20+ 5G, Galaxy S20 Ultra 5G, and Galaxy A71 5G.
In addition, Google added a couple of its own phones to the mix, specifically the recently announced Pixel 5 and Pixel 4a 5G. And of course you can still use any unlocked phone that is compatible with T-Mobile's 5G network, with Google Fi.

"When using these Samsung and Pixel phones on Fi, you get access to 5G—the next generation of mobile network technology that lets you do things like download a high-res, full-length movie on your phone in minutes. And 5G speeds will help you use Full HD video calling (1080p) on Google Duo to connect with loved ones faster and with more clarity. Fi’s 5G coverage is nationwide and comes included in all plans," Google says.

To sweeten the pot, Google is offering credits on several phones when buying directly from the company and activating them. That includes a $300 discount on all of the aforementioned Samsung phones, save for the Galaxy A71 5G, and $100 off the Moto G Stylus and Moto G Power. Additionally, the Galaxy S20 5G is marked down to start from $699 (instead of $999) today. 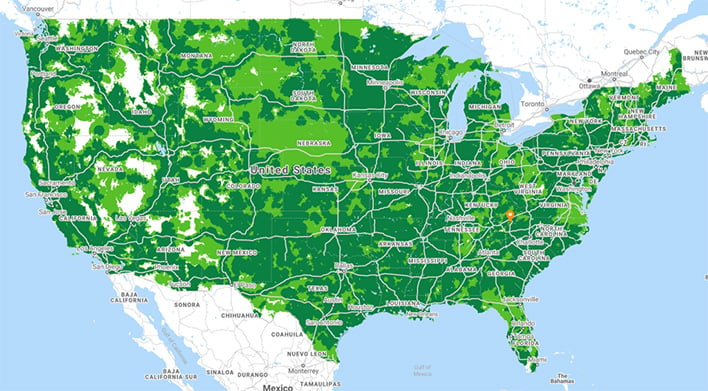 Google is really wanting to highlight its 5G support. To show it off, Google posted a 5G coverage map, which allows potential customers to look up what is available in their area. In the map shown above, the dark green areas offer 5G connectivity, while the light green is 4G.
5G connectivity on Google Fi (served through T-Mobile's network) has been available for a few months now, but the added emphasis comes as Google is about launch to retail its own 5G handsets.