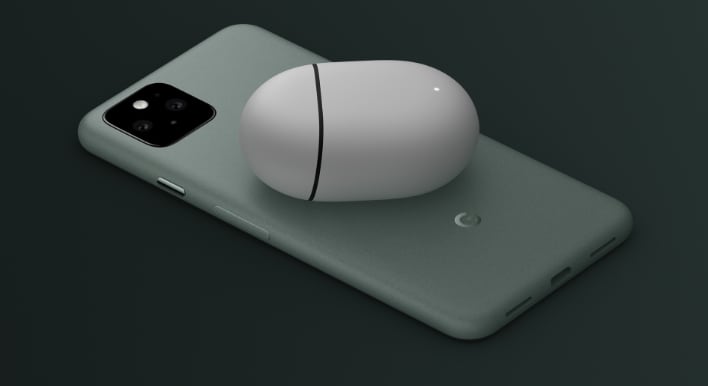 They're finally here, folks. Google has officially revealed both its new Pixel 5 and Pixel 4a 5G smartphones: its first ever 5G devices. The Pixel 5 is technically the new flagship smartphone from Google, buts its specs put it decidedly into the mid-range category.

As we previously reported, the Google Pixel 4a 5G and Pixel 5 are both powered by the Qualcomm Snapdragon 765G SoC, which includes a Snapdragon X52 5G modem. But there are quite a few differences between the two devices which we'll list here:

Both smartphones also share the same front and rear cameras. The selfie camera features an 8P sensor with f/2.0 aperture. The rear cameras include a 12MP primary sensor and a 16MP ultra-wide sensor. The ultra-wide sensor features HDR+ capabilities, and both phones now support a Night Sight Portrait Mode. Since People use their smartphones total tons of video as well, Google has included three new shooting modes: Locked, Active, and Cinematic Pan. You can see all of them in action below:

When it comes to the all-important aspect of pricing, that's where things get interesting. The Pixel 4a 5G is priced at $499, which makes it competitive with other 5G enabled Snapdragon 765G powered smartphones on the market. The Pixel 5, on the other hand, is priced at $699, which put it at the bottom end of pricing for Android smartphones with the flagship Snapdragon 865 SoC.

For example, the OnePlus 8 recently received a price cut to just $599 (and will soon be replaced by the OnePlus 8T). Similarly, the Samsung Galaxy S20 Fan Edition (FE) was announced earlier this month with a price of $699. However, its price tag has already been reduced to $599 during the preorder phase; and we can definitely see that being its normal everyday price going forward. Despite being priced $100 less than the Pixel 5, it features superior specs including a Snapdragon 865 SoC, 6.5-inch 120Hz display, larger 4,500 mAh battery, 32MP selfie camera, in-display fingerprint reader, and triple rear cameras. But to be fair to Google, the Pixel smartphones have always been a step ahead of Samsung when it comes to camera processing and you don't have to deal with the loads of bloatware that comes preinstalled on Galaxy devices.

You can click the following links to preorder the Google Pixel 4a 5G and Pixel 5. However, it will be interesting to see how the Pixel 4a 5G and Pixel 5 compete in the fast-expanding 5G Android smartphone market. Do you think that the Pixel 5 in particular will be able to stand out from the crowd with its $699 price tag? Tell us what you think in the comments section below.