The concept of "private browsing" has been around for well over a decade and has been incorporated into all major web browsers. The concept is similar across all these browsers as well: it gives users a new, "clean" session that wipes out your browsing history when you close the tab. While your IP address and other information can still be tracked, someone with direct access to your computer or shared mobile device wouldn't be able to easily see what sites you visited or content you searched for.

While this is a definite "perk" of private browsing, you still need to actually close out the session or someone could just open the browser, and click over to it. Google, however, is looking to prevent this potential security risk (or embarrassment depending on what you're searching for) with a feature called "Lock Incognito Tabs" in Chrome. This feature would lock your Incognito browsing sessions behind biometric authentication in iOS.

Apple's iOS devices currently support two types of biometric authentication -- Touch ID and Face ID -- and both will be supported by Lock Incognito Tabs. In practice, if you were to hand your iPad Pro over to a friend who wanted to use it to perform a quick search for something on the web, they wouldn't be able to open the carousel within Chrome and flip to your Incognito tabs. They would need to authenticate first with Touch ID or Face ID -- even if you mistakenly left an Incognito session open. 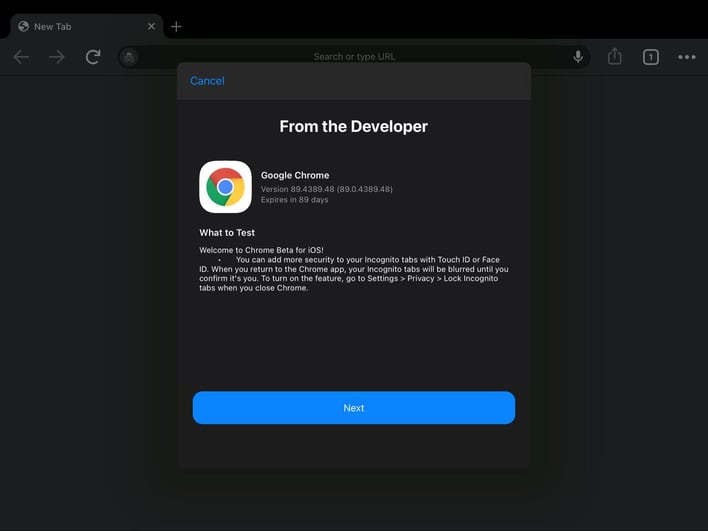 According to 9to5Google, the features is limited to a current subset of Chrome 89 beta users, and there is apparently a server-side component that is required for it to function. It's expected that Chrome 89 will be released to the public channel sometime in March, however, there's a wrinkle in that plan for iOS users.

Google has been reticent to updating some of its most popular iOS apps due to Apple's new enforcement of App Privacy labels in iOS 14.x. These labels inform users of what data is being collected and shared by apps, and given Google's thirst for data, disclosing every single way that it tracks you might be somewhat off-putting to users. For Google to release an updated version of one of its apps in the App Store, it must first comply with the new App Privacy labels.

For example, Chrome 88 is the current public channel release for Google's browser, while iOS devices are still on Chrome 87. Chrome, Gmail, Google Photos, and Google Maps haven't been updated in roughly two months as Google works to figure out its data collection methods on iOS.