Single-board computers (SBCs) are wildly popular AI development platforms and excellent tools to teach students of all ages how to code. The de facto standard in SBCs has been the Raspberry Pi family of mini computers. NVIDIA of course has its own lineup of programmable AI development platforms in its Jetson family, including the recently-announced low cost version of the Jetson Nano. There are a host of others from the likes of ASUS, Hardkernel, and Google. Google's Coral development kit was a rather pricey option at $175, but now the same power is much more affordable.

The older Coral Accelerator, which launched last fall, uses Google's Tensor Processing Unit (TPU) architecture for AI inference. Unfortunately, those boards are a bit pricey, usually retailing for around $160 or so. Google had said at the time of the Coral's launch it wanted to target lower-cost markets, and now it has. The Coral Dev Board Mini single-board computer should cost just $100 by itself.

Google says it intends to release a version of the Debian-based Mendel Linux that supports the TensorFlow Lite and AutoML Vision Edge libraries. TensorFlow Lite is a multi-purpose AI inferencing library designed to run a host of AI models on devices. Google describes AutoML Vision Edge as a library of "fast, high-accuracy custom image classification models" which runs in Google's own Firebase Cloud. 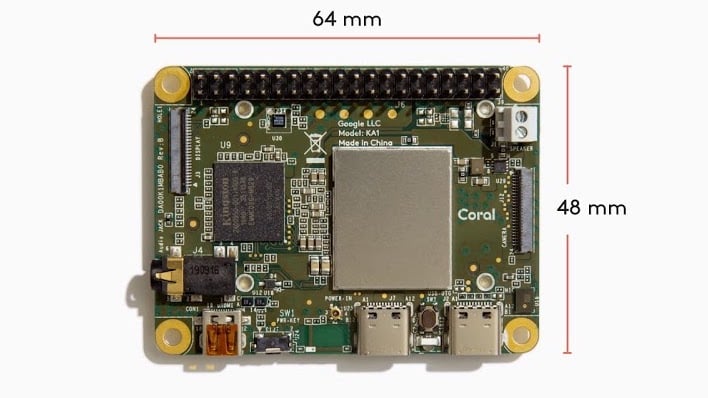 As is often the case with these devices, the star of the show isn't the quad-core Cortex A53 SoC aboard, but the machine learning (ML) inference-focused co-processor. These processors take already-trained AI models and run them very quickly, usually relying on very fast, very small (usually 8-bit) calculations. Google says the Coral Mini has the same high-speed ML inferencing co-processor as its more expensive siblings, and is capable of performing 4 trillion operations per second, or 2 TOPS per watt of power consumed. There's 2 GB of LPDDR3 memory and 8 GB eMMC storage onboard to hold projects and working data.

The mini board has a 40-pin GPIO header, a pair of USB-C ports for power and connecting to a PC, and a 24-pin ribbon cable port for a camera module, which should give it plenty of field utility. This is not an all-in-one solution like the Jetson Nano dev kit, but should work for anybody with a PC who wants to get started in AI. IoT hardware reseller Seeed Studio has opened up pre-orders for the Coral Dev Board Mini with an estimated ship date of October 31, which isn't too far off. That's right around the same time as the 2 GB Jetson Nano's estimated availability. They're also available for the same $99 price and availability direct from Coral's online store.