Remember Centaur Technology? No? Well what if I say "Cyrix"? Ah, that got your attention, didn't it? How about S3 Graphics? VIA Technologies—yeah, that "VIA"—owns the IP from both companies, and it has partnered with the Chinese government (through SASAC) to create a joint venture named Zhaoxin. The purpose of Zhaoxin is to create home-grown PC components so that China can reduce its reliance on foreign (read: American) tech firms.


Zhaoxin has already shipped several generations of x86-64-compatible CPUs, but to date, it hasn't moved any graphics processors. That's why an entry in the Geekbench OpenCL benchmark database, surfaced by Benchleaks today, is so interesting. It describes a Zhaoxin KX-6000-series system with an 8-core, 8-thread CPU equipped with a "Glenfly Arise1020" graphics card. 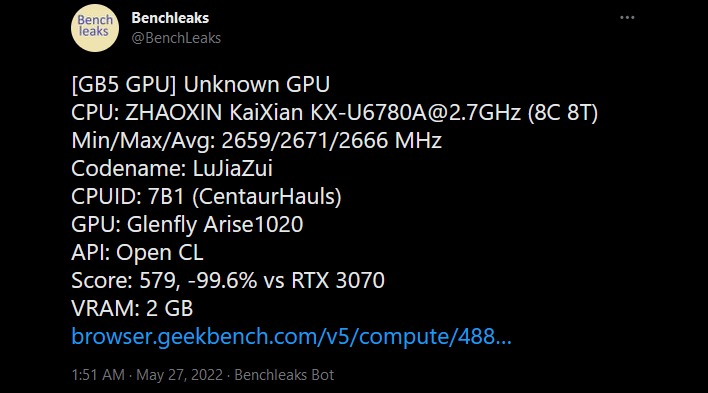 We have absolutely no idea what a "Glenfly Arise1020" might be, but we know who Glenfly is, at least—it's the graphics arm of Zhaoxin. We don't know anything about the company's graphics architecture, like whether it's based on the old S3 technology or an all-new design. We do know that the company demonstrated a GPU running Unigine Heaven last year, which means that the company's hardware is capable of DirectX 11.1 rendering, at least.

The OpenCL benchmark score for the Arise1020 is a measly 579 points, which is, to be frank, absolutely pathetic. 579 points puts it well behind integrated GPUs from several generations ago, such as the Radeon R3 graphics in an Athlon 5150 "Kabini" APU, which scores 1569. It's so slow, in fact, that we suspect that the benchmark did not actually run correctly, perhaps using some sort of software emulation or debug interpreter.


It will be interesting to see if any more details or tests of this GPU surface. Even if the benchmark is legitimate, we suspect that this is likely a low-end model intended for basic display purposes. It's difficult to imagine Zhaoxin's Glenfly challenging AMD or NVIDIA, but another vendor of functional basic GPUs could be a boon to a nearly desolate low-end GPU market.
Top image: Glenfly