We've covered a bunch of gaming laptops announced at CES (or just ahead of CES, since the event officially kicks off today, but whatever), but don't worry if you're a creator, there are new notebooks aimed at you as well. In fact, you are the target of Gigabyte's new Aero 16, Aero 17, and Aero 5 laptops, all of which come infused with Intel's new mobile Alder Lake-H processors.
Gigabyte is also laying claim to releasing the "first 4K+ laptop," though it apparently forgot about systems like Dell's XPS 13 2-in-1 (7390) and Razer's Book 13, both based on Tiger Lake. Like those systems, the Aero 16 derives its 4K+ designation from having a 3840x2400 resolution with a 16:10 ratio, instead of 3840x2160 with 16:9 aspect ratio.
Or perhaps the headline in Gigabyte's press release inadvertently left out a qualifier or two, as to our knowledge, the Aero 16 is the first 4K+ OLED laptop, and also the first 4K+ Alder Lake laptop. Regardless, let's not get caught up in the claim, because this is actually a nifty laptop. Creators will be happy to learn that the display is dual certified for color accuracy (X-Rite + Pantone Color).

"By squeezing the 16-inch 16:10 4K+ OLED and AmLED screen to the traditional 15-inch laptop body, the work area has significantly increased 12 percent in the viewing area compared to the previous generations. Not only does it retain the outstanding accurate color performance on the screen, but the series also possesses the advantage of being the world’s only dual display color-certified laptop series," Gigabyte explains. 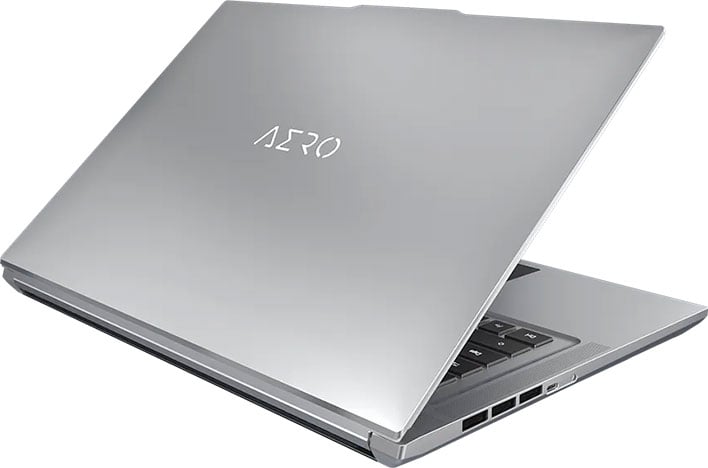 It's also a sleek system with some powerful guts. Gigabyte says it can be configured with up to a Core 19-12900HK processor, which has an unlocked multiplier (suggesting the Aero 16 has the cooling chops to handle a bit of overclocking) and up to a GeForce RTX 3080 Ti graphics chip. NVIDIA just announced its new flagship mobile GPU, and so even though the Aero 16 is aimed at creators, gamers should take interest in this setup as well.

As for the Aero 17 and Aero 5, both stick with regular 4K (16:9). The Aero 17 has a few distinguishing features, though. It's obviously a larger laptop with a 17.3-inch display, but it also features mini LED lighting with the same dual-color certification. It can also be equipped with the same high-end hardware as the Aero 16.
The Aero 5, meanwhile, joins the fray with dual-color certification, with hardware topping out at up to a Core i7-12700H and GeForce RTX 3070 Ti. Gigabyte says it aimed to deliver creators a graphics punch "without getting blocked by a premium price tag."

Pricing and availability on all three Gigabyte Aero laptops have not yet been announced.