It's been just over a month since AMD officially launched its Radeon RX 6600 XT graphics card with 8GB of GDDR6 memory. That's not the end of the road for AMD's Radeon 6000 series, though. More models will inevitably be introduced, and if newly leaked renders are any indication, a Radeon RX 6600 (non-XT) is in the wings.
Let's talk about the XT version first. The Radeon RX 6600 XT is built around a Navi 23 XT GPU with32 compute units, 2,048 stream processors, 32 ray accelerators, and 8GB of GDDR6 memory linked to a 128-bit bus, for 256GB/s of memory bandwidth. It also features 32MB of Infinity Cache, and has a 1,968 base clock, 2,589 boost clock, and 2,359MHz game clock.
It's been rumored a regular (read: non-XT) Radeon RX 6600 is in the works, and some freshly leaked renders suggest Gigabyte is ready to go with at least one model (and likely more, if the new SKU comes to fruition. 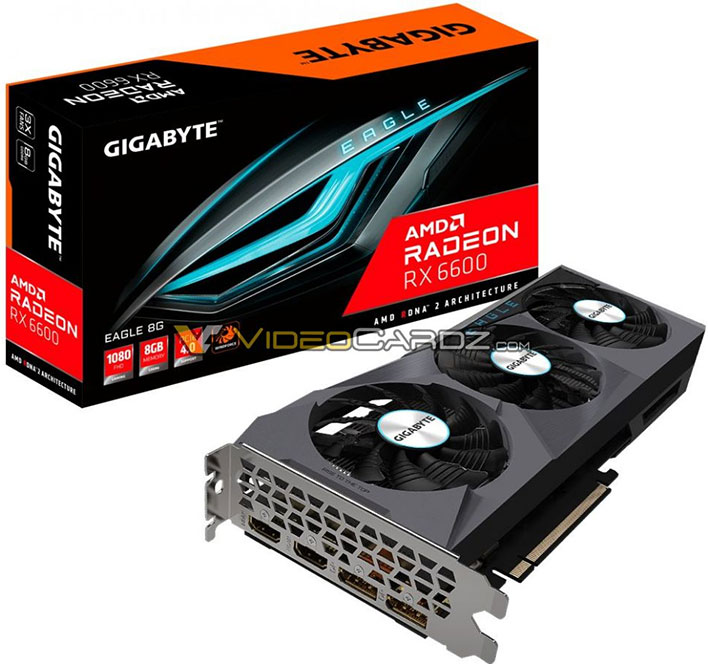 Are the renders real? Gigabyte's supposed Radeon RX 6600 Eagle renders are virtually identical to its Radeon RX 6600 XT Eagle renders, just without the "XT" on the packaging. That would be extremely easy to manipulate with a program like Photoshop, even for novice photo editors.
Assuming this is a legitimate leak, though, the Radeon RX 6600 will have the same 8GB GDDR6 arrangement as the XT model. Based on past rumors, it will be built around a Navi 23 XL GPU with 1,792 stream processors, which happens to be the same number found on AMD's Radeon Pro W6600.
It's also said the underlying PCB is different from the XT model, and that the card is slightly shorter, none of which we can really see in the renders. As to the performance, rumor has it the Radeon RX 6600 may not quite match the performance of NVIDIA's GeForce RTX 3060, and will compete with the upcoming GeForce RTX 3050. If that's the case, we would expect (hope, really) pricing to be in the $299 range.