You can bet motherboard makers have every intention of giving Alder Lake the flagship treatment, and lest there be any doubt, leaked images showcase Gigabyte's upcoming Z690 Aorus Xtreme. It's a beauty for sure, and also wields some fancy technology on board—dual PCI Express 5.0 slots and DDR5 RAM support among them.
The Z690 Aorus Xtreme is built around the Extended ATX (E-ATX) form factor, so users who buy this thing will have to make sure they have a roomy chassis that can fit the oversized (compared to regular ATX) motherboard. While all the details have yet to be revealed, there are certain elements we can pick out from the images. 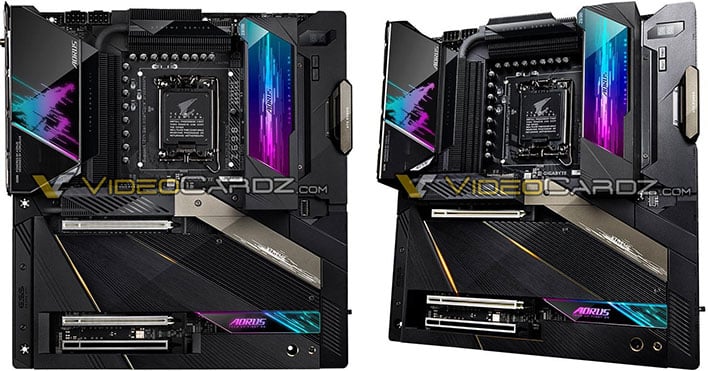 One of the more interesting bits is the memory shroud, with what appears to be RGB lighting. We presume (hope) it is removable, because otherwise builders would be unable to show off their fancy DDR5 memory modules, if they so choose. Some initial kits are bound to look drab, but some companies have also already announced memory kits that are dressed to the nines, like the G.Skill's Trident Z5 series. It would be a shame to hide those underneath a shroud.
There's lots of metal coverage across the majority the PCB, which lends the board its sleek appearance. We can also see a trio of PCI Express x16 slots, two of which are said to be PCIe 5.0. It remains to be seen how much next-gen graphics cards will benefit from the faster bus specification.
According to Videocardz, which got its hands on the Aorus Z690 Xtreme images, the board serves up a Marvell-powered 10Gbps LAN port and two Intel-powered 2.5Gbps LAN ports for fast wired connectivity. And on the wireless side, Wi-Fi 6 (802.11ax) is present and accounted for.
Other features include three M.2 slots for storage duties, and a Thunderbolt 4 port with support for 5K at 60Hz. The board is said to be launching on November 4, along with an Xtreme WaterForce version with a pre-installed waterblock.